From the 30th of October to the 30th of November 2014. Dubrovnik Tourist Board, in collaboration with the British Airways, has succesfully promoted winter in Dubrovnik. Their campaign, which was worth around 40,000 pounds, was shown across multiple marketing channels in the UK.

Namely, on the website BA.com Dubrovnik was placed under the category named Special Offers. Additionally, in the popular journal Escapism Magazine the City was described as a place for the ‘vacation of the month’. And in the ‘Travelzoo’ newsletter, the frontmost UK newsletter for traveling, the City was promoted as a perfect destination for winter holidays. Hotels Rixos Libertas and Radisson Blu also promoted Dubrovnik through their ads in Travelzoo.

From the 3rd to the 16th of November, Dubrovnik was also shown on panels of city trains that were operating in the zones of Brighton, South East London and Kent, all regions that connect airport Gatwick with London. Therefore the Britons, who are the most frequent guests of Dubrovnik, were reminded once again that Dubrovnik is an attractive winter destination which is merely a flight away from London. Flights are available every week, on Fridays and Mondays, from the late October till the end of March. 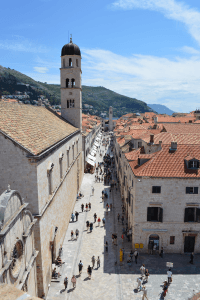