Just ten more days separate us from the greatest European festival – Dubrovnik Summer Games. The games will be back in the city for the 66th time in a row. This year they will bring us new experiences. Dubrovnik will kiss France in the name of friendship and hospitality, as France will be the host country of the new edition of Summer Games. But these are not the entire news.
This year’s visual identity of Dubrovnik Summer Festival is a continuation of the parallel drawn between architecture and anatomy. For the third year now it carries a strongly dramatized slogan ‘walls of stone, heart of art’. Authors of the new identity are Maro Pitarevic and designer Gabrijela Farcic.
‘A new visual represents a combination of heart and Onofrio Fountain, the largest and most recognizable monument of the city. Its strength represents a combination of organic and inorganic, which are totally different and yet they have a lot of similarities to the function and in the form’, explained its authors.
Why the fountain? Because Dubrovnik knows how it is like to be without a water. Namely, Dubrovnik is among a few Croatian cities that doesn’t have drinking water all year long. Dubrovnik is, on average, dry at least a month per year. Every year! Cleaner drinking water is one of the most pressing questions for Dubrovnik, and this question is once more being asked through this visual solution. 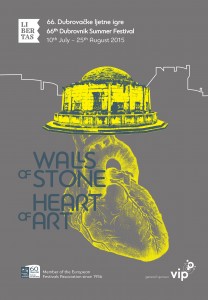