Dubrovnik has been presented in Copenhagen, the capital city of Denmark, last week. Danish journalists, and others who attended presentation, were delighted with Dubrovnik’s Game of Thrones tours.

Therefore it is not surprising that in the article published in Metro Xpress, Danish most reed free newspaper, they promoted Dubrovnik and Croatia mostly using the famous TV series.

“New York has Sex & The City, New Zealand has Lord of the Rings, and Croatia has Game of Thrones! The TV series with Danish Nikolaj Coster-Waldau in the lead role has been played out in the Croatian city of Dubrovnik, the most of it at least. The Old town offering the setting for the dream universe of King’s Landing”, was written in the article.

Praises about King’s Landing were shared by over 500 000 users on the Internet, and by almost the same number of newspaper readers. Metro Xpress promised them that if they came to Croatia they would be able to experience atmosphere from the TV show.

“According to the Croatian Tourism Board, it will be possible to approach the well-preserved buildings, impressive city walls and lush gardens, we got to know from the series.”

This summer this “adventure” will be much easier for Danish tourists, due to the cooperation of the airline company SAS and Norwegian Air Shuttle. Together they will introduce direct flights from Copenhagen to Dubrovnik.

Therefore, it is expected that Danish tourists who love Croatia and Dubrovnik, would come and visit King’s Landing in great number this year. 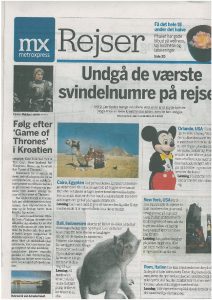