“I wanted to get engaged. And I wanted it to be in a special place. Unfortunately a lot of places were closed which in the end turned out to be fortunate for us, because I wouldn’t have chosen this place. Jen Duncan at Brio Travel recommended us Croatia. And you know, I was a little bit nervous because I’ve only been to Hvar a very long time ago. We got to Dubrovnik and I was completely blown away. It exceeded my expectations, every single place we went. I was like: ‘This is definitely the spot,’” says Bill Perkins, American hedge fund manager, film producer and high stakes poker player who got engaged with his longtime girlfriend this week in Dubrovnik. His fiancé, professional dancer Lara Sebastian, was ‘shocked’ when he popped the question. We spent the evening with the newly engaged couple on a beautiful yacht anchored in front of the Island of Lokrum where they told us everything about the life changing moment a few days ago.

“I’m still very much in shock and just getting used to having the ring on my hand. So, we like to have a date night. We are on a boat with a lot of people, but we still like to take time away just for the two of us. We took the boat over, we got off and we had a tour guide show us a little bit around the Old City. He walked us up to St. Lawrence Fort. And I climbed a bunch of stairs in heels. Once I got to the top, I was just overwhelmed. The view was amazing, he had us a table set up. It totally blew me away! The music was playing some of our favourite songs,” she told us. They sat and chatted about the past and how great it’s been. 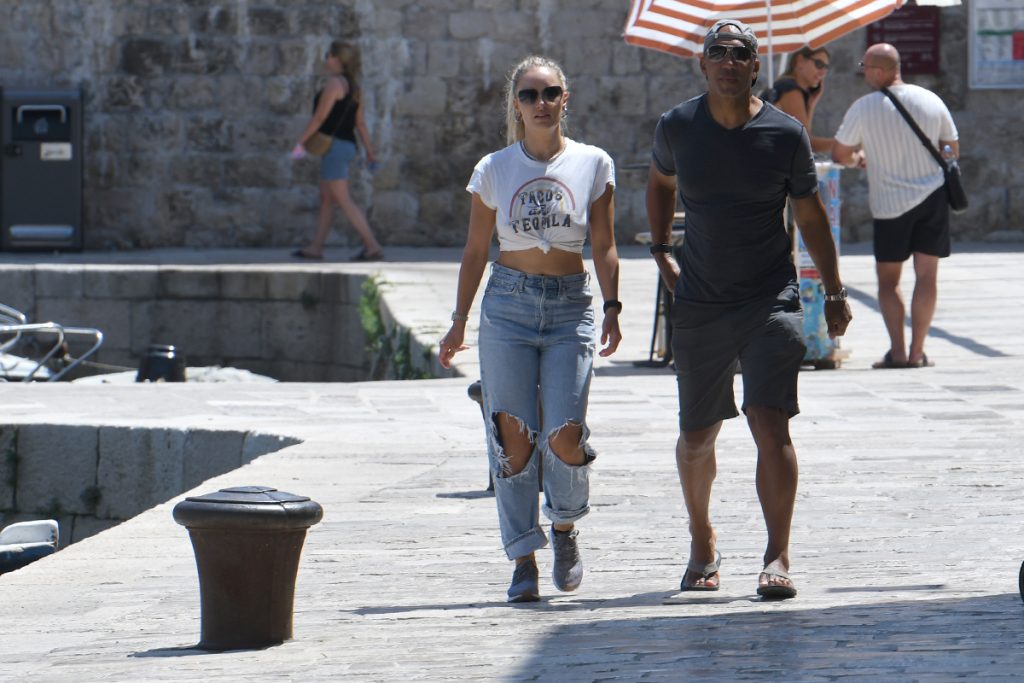 “I had everything timed! This was a military precision thing! We were enjoying ourselves and hanging out. I had the staff strategically place the ring. It was already there. And then I came over to talk to her… I said: ‘Well, I have something I want to say’. As soon as I went down on my knee, she just kind of blacked out. She didn’t hear a word I said. There were just tears going down her eyes. I asked her: ‘Can I love you? Will you be my queen? Will you be by my side?’. She said yes, but she didn’t know what I was saying,” Perkins pointed out the details from one of their most beautiful moments. They spent some time together, danced a bit, listened to the songs and enjoyed the view. 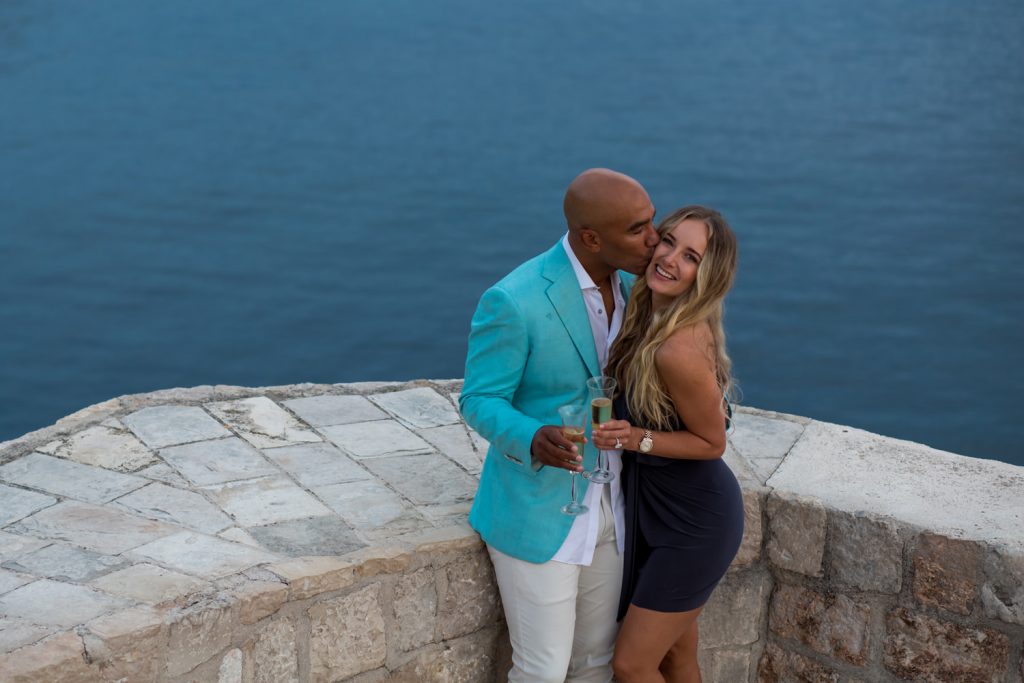 “After St. Lawrence, we went to Mount Srd to celebrate with our friends. We had snacks. There were musicians. We took in the view and just kind of soaked in the moment. Afterwards we came to the 360 Restaurant. Dinner was fantastic! I was giving a toast, and as we hit the glasses, the fireworks went off. After that, we went back to the yacht. We had a costume party, DJ, no rest!” Perkins remembers.

“Hands down – the most romantic thing anyone has ever done for me. Everytime he just tops it and I don’t know if he’s going to keep topping,” Lara Sebastian said and Perkins added: “Dubrovnik had a lot to do with it. This place is fantastic! This was strategically chosen. It is a very romantic place and I highly recommend it to people. If you want to get engaged, plan a trip here. The city, the history, the culture – it is very beautiful. I know the most important Croatian word. It is ‘ljubav’. I also know ‘hvala’”. Lara Sebastian wants to learn more words from the Croatian language. “I’m on a mission now,” she told us. 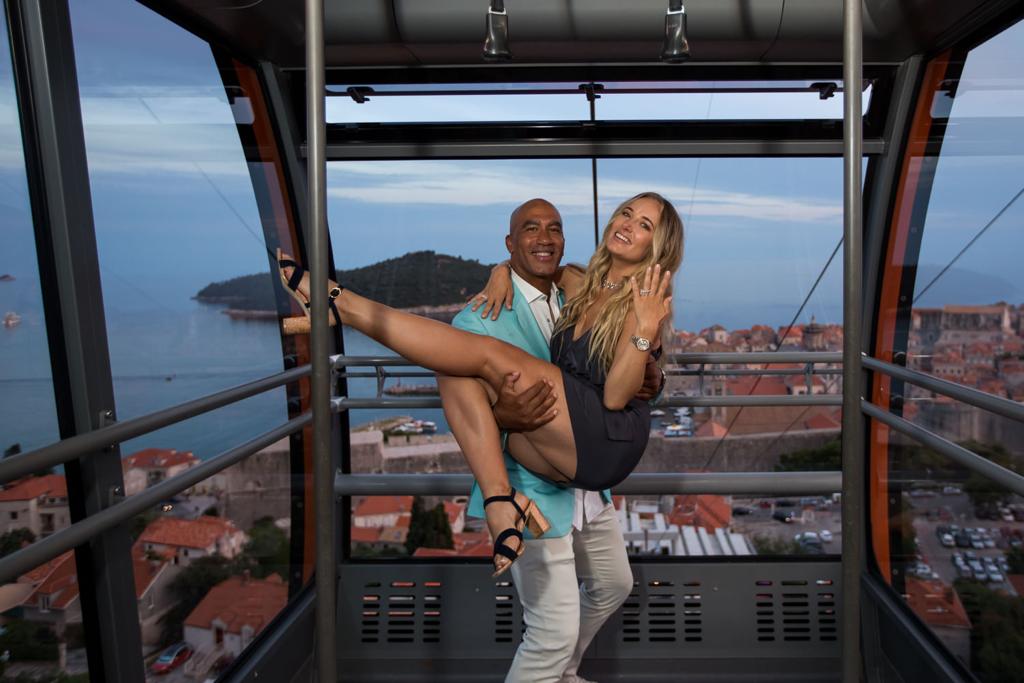 “She’s crazier than me”
Lara Sebastian is a born Canadian who has been living in LA for seven years now.

“I went down to live up to my dream. Being a dancer and artist is always such a ‘grind’. But it is well worth it and I have a really supportive family and friends. And now a fiancé, which is still very weird to say! It’s hard work but it’s really rewarding and it’s really exciting to be sharing the stage with him,” she explained us her life path. For Perkins, she’s very kind, compassionate, sweet and obviously beautiful.

“She’s also very understanding and self-aware. And she’s crazier than me! I figured out – I got a partner. I don’t know who’s Robin and who’s Batman. We’re a team!” Perkins told us. They met four and a half years ago at a party in Cabo. It was a little bit chaotic in the beginning, they said. “But out of the chaos comes opportunity and we built our relationship ever since” he stated. And it all started with karaoke! 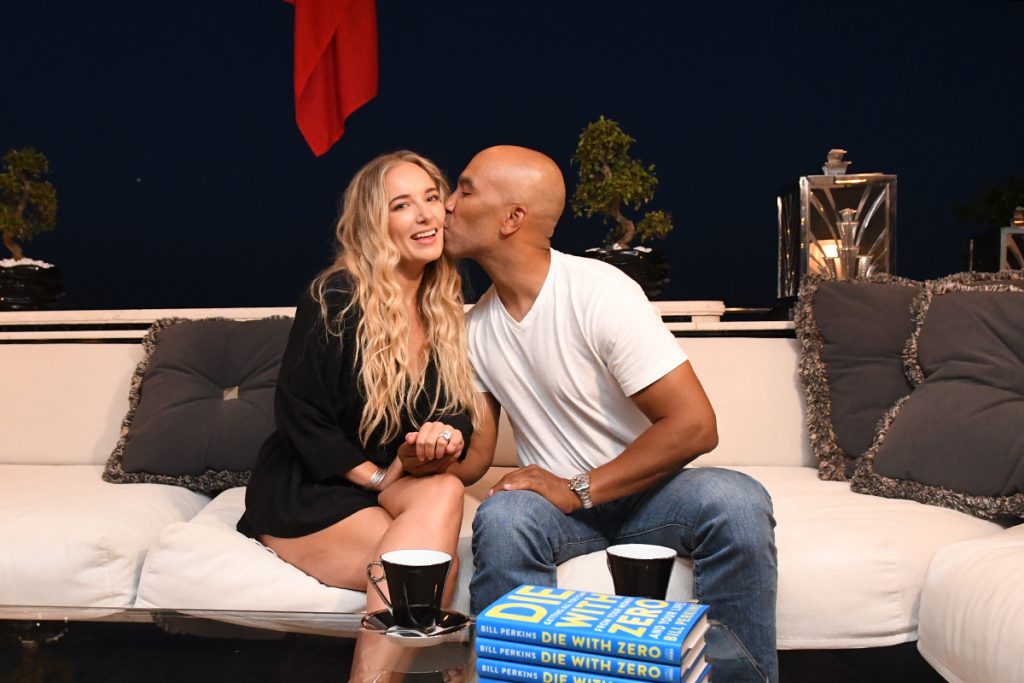 “I’m a fan of karaoke. I’m kind of addicted to it. There’s a song in the movie Grease called ‘Summer nights’. (then they started to sing). We met on this trip and I couldn’t get her out of my head. She lived in California and I lived in the Virgin Islands… So I started creating excuses and parties for us to meet. I sent her a message: ‘Bahamas?’, cause I was going there to play poker. I’m a big poker fan, I love to play poker. She was convinced, she came and it all slowly kept going… We became boyfriend and girlfriend four years ago,” said Perkins. “Sums it up!” Sebastian added.

“We met and we had this infectious thing. We couldn’t really get away from each other. And here we are. Four and half years later,” Sebastian pointed out. This was Perkins’s second visit to Croatia.

“And the only one I’m going to remember. Last time I flew in and flew out. This is the first trip where we actually got to explore Croatia, get out, have a tour guide tell us about the history – actually going in to absorb more of it! So I would consider this my first time,” he told us. It’s Lara’s first time in Dubrovnik.

“I love it. I’m just totally fascinated with everything about Dubrovnik. I’m so happy to be here” she says. 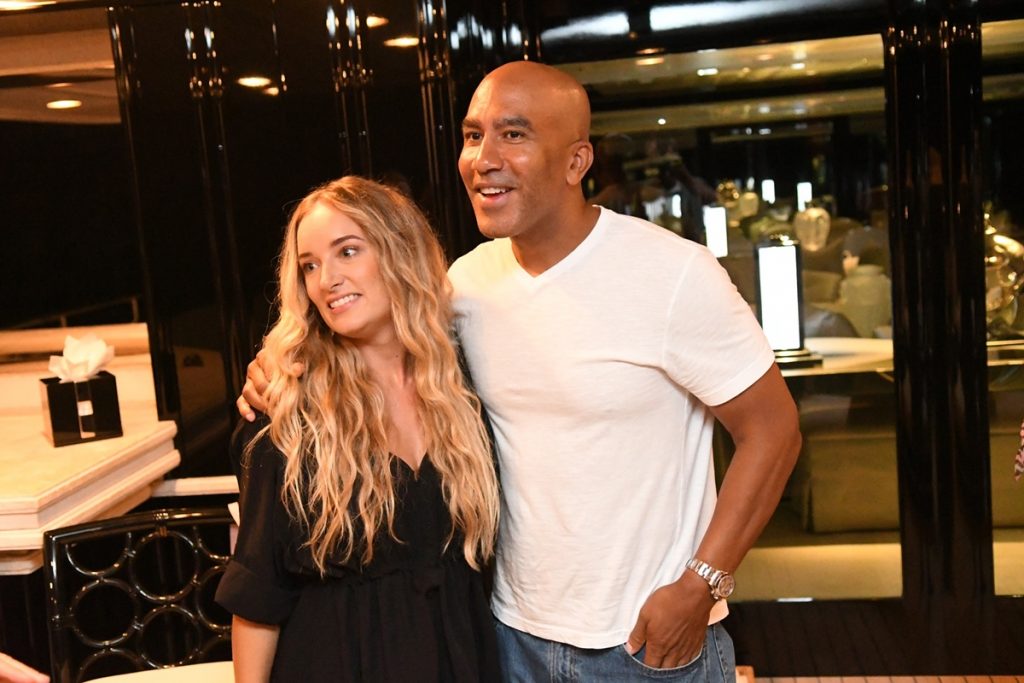 The best poker face?
Perkins is known for his glamorous lifestyle and high-stakes poker games. We asked him what makes a good poker player and how do these qualities manifest in business?

“I think it’s the nerves, ability to accept risk, a little bit of math and calculations, understanding the cards and willingness to put it all on the line. And I think it’s the same in business – you’re taking a risk. All the small businesses and shop owners here are putting their lives on the line. They are putting their life savings into an idea that they think is going to work and be profitable and they are going to get money in exchange to do whatever they want to with that money. It’s very risky – riskier than poker. So, you have to have intestinal fortitude, guts! You have to be strong, use math and make proper calculations. I think those skills translate back and forth,” he pointed out. For him, the best poker face comes from the Germans.

“So, when you’re sitting across a German you don’t know what’s going on there. They are very meticulous!” he emphasizes. Perkins told us a little bit more about his new book he will be releasing on July 28, 2020. It is called ‘Die with Zero: Getting All You Can from Your Money and Your Life’. ‘Die with Zero’ will teach you Perkins’s plan for optimizing your life, stage by stage, so you’re fully engaged and enjoying what you’ve worked and saved for. 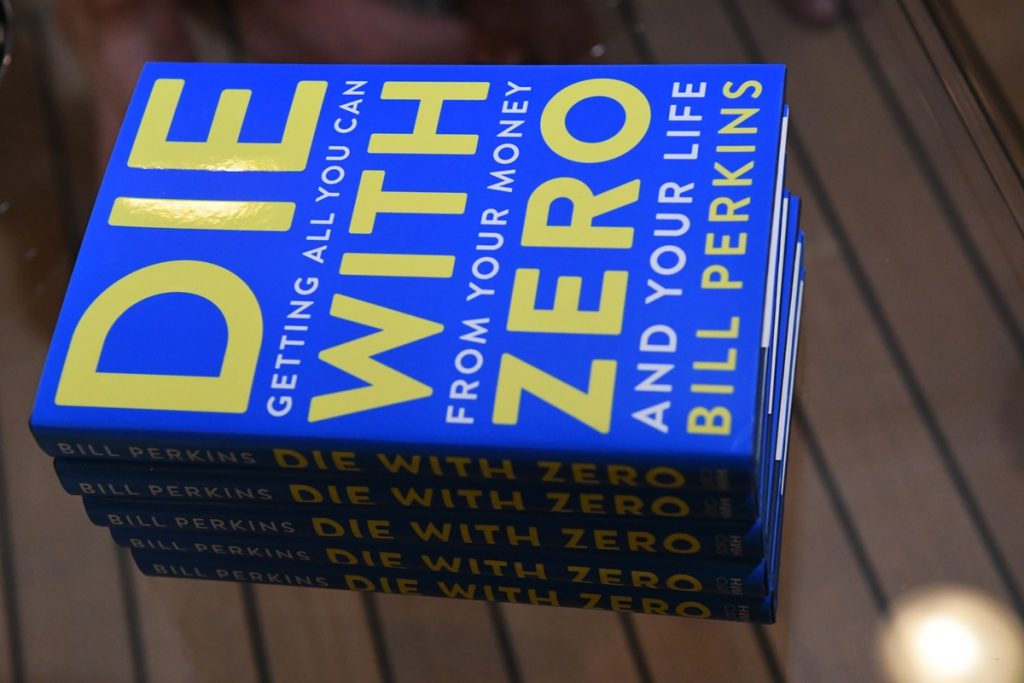 “I’ve been thinking about what experiences I want to have in my life, when I’m supposed to have the experiences and when is the best time to have experiences. So, I think if you time your experiences and you consume them properly, you will have the most fulfilling life you can, no matter how much money you have. I wanted to share my way of thinking about that with other people and how to get the most out of their life. So I wrote a book about it. Hopefully, people will read it, get value out of it and have a fantastic life,” Perkins explained to us. Lara told us that she was ‘so excited for him’.

“It was just an idea and then he started writing. And it started slowly becoming a real actual book. I’m so proud of him. It’s been long hours, so many conversations, so much editing. He put his heart and soul into it. I’m really proud and excited for everyone to read it,” Lara Sebastian stated, “Even if just one person reads it,” Perkins added.

“If only one person changes their life, I’m happy” he pointed out. 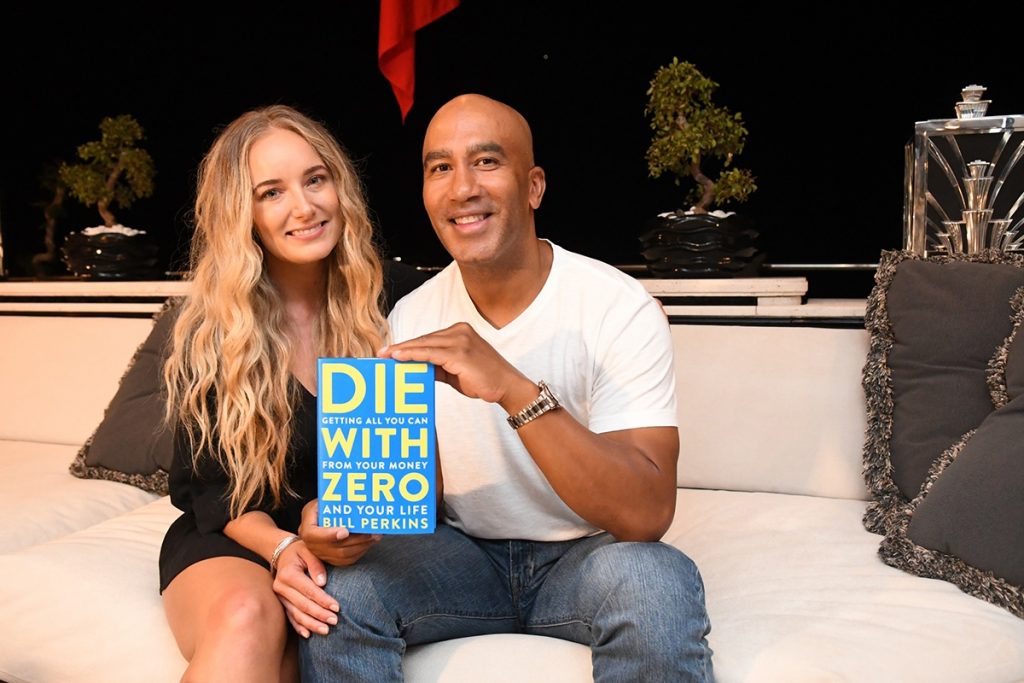 His most memorable experience in Croatia, beside his unforgettable engagement, was the day at Krka Waterfalls.

“We got to be in nature which is one of my favourite things. We had it sort of to ourselves because of the situation with coronavirus,” Perkins told us.

“I’ve got my eye out on real estate here. Cause this is the place I’d love to come back to,” Perkins pointed out and told us that he would love to explore Northern Croatia.

“Everything has been a surprise to me. I’m looking forward to more. You will 100 % see me back in Croatia. I’m very happy to be here and I’m going to tell my friends. A lot of people told us they didn’t know about this place – that they would love to know more,” he said. And what about a wedding in Croatia? 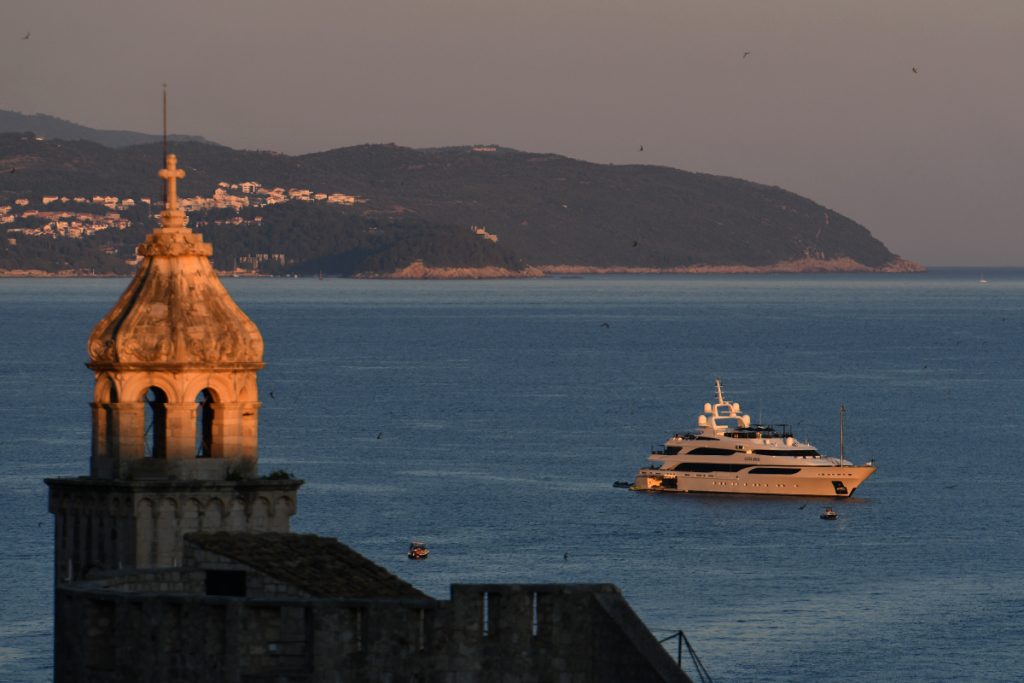 “Wow! Yeah, we could definitely do it here. I’ve been spying on a couple of spots. Now we are just thinking about where we are going to have the ceremony. It’s very possible,” he told us.