Cordonia is a fictional European country in the Rules of Engagement and in the The Royal Romance series. It is ruled by King Constantine, and is the home of Queen Regina, European Guy and Prince ‘Liam’. This is the description of, of course, fictional place, but as we can see – Dubrovnik made a great impact of the aesthetics of the game.

In this picture, we can see Pile, the part of Dubrovnik so beautiful that is often used in novels, plays, and series – such as Knightfall or Game of Thrones. 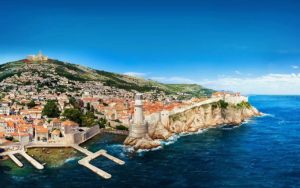 In this case, Dubrovnik is a part of virtual novel ‘The Royal Romance’ a part of the ‘Choices: Stories You Play’ collection. If you want to play it, the line follows you, a waitress from New York who’s invited to the Kingdom of Cordonia as a potential suitor for the Crown Prince.

Cordonia’s capital city (inspired by Dubrovnik) is shown to have a large casino district, where the rich and famous, as well as top government officials, gather to gamble. Cordonia is possibly a larger country than previously thought, as it is shown in The Royal Romance that it also has a mountainous northern region where it usually snows, it says on the Wiki pages of the game.