Dubrovnik Summer Festival’s recent press conference announced the third premiere title of this Festival season – the play Geranium by director Marina Pejnović and dramaturge Ivan Penović, and performed by the Festival Drama Ensemble. Geranium is based on the eponymous Ivo Vojnović short story and Antun Šoljan’s Island. The first performance is on Tuesday, 20 August, at 9.30pm in the Art School Park. Artistic Director of the Festival Dora Ruždjak Podolski, her Assistant Artistic Director for drama Saša Božić were joined by Josipa Vodenac, Director of the OTP Bank Business Center Dubrovnik and Southern Dalmatia who donated to the play and the play’s director Marina Pejnović along with the dramaturge Ivan Penović and Festival Drama Ensemble members.

Ivo Vojnović made his debut on the literary scene with the short story Geranium, a story which announced and anticipated the upcoming waves of Modernism and Symbolism in Croatian literature at the end of the 19th century. Embracing a female perspective, Geranium is a story about a woman named Mare who is said to have been born old, it is a story about solitude. In Geranium, as in all his great later works, Vojnović treats this solitude as a continuous, progressive state and as a space and time of identification of the protagonist’s state. Here, solitude is a matter of surrendering to fate, it is a testimony of entrapment by the place in which we were born. Mare consorts with solitude so others would not have to know it. In this play, Vojnović’s view of solitude is supplemented, but also counterposed, by Antun Šoljan’s Island, with the island offered as a place of escape and a place of rest where one can burrow into solitude which has a foreseeable end, unlike the one of Geranium, an end which for which we do not wish.

– ‘The event that is before us, the premiere of Ivo Vojnović’s Geranium, is important for two reasons. Firstly, it crowns an interesting, varied and successful Festival theatre season. Secondly, but not any less importantly, the premiere of Geranium is a particular repertoire feat that is not only crucial for the Festival but for the entirety of Croatian theatre too as it is the first performance of this Vojnović work ever. Thus, Vojnović’s first short story – that was printed in Vijenac, in 1880, under the patronage of the great August Šenoa – shares the fate of its first stage performance. Another interesting thing that ties into the story of Geranium’s first performance is the fact that, until now, the legendary writer of the Festival and his rich opus have mostly been reduced to repeated stagings of the Dubrovnik Trilogy and the Equinox – Geranium being the one to break that mould, along with it being a piece which loudly and openly talks about femininity and womanhood. Vojnović’s Geranium was put in print when he was just 23 years old and now that young Vojnović has been put into the hands of a creative team that is also quite young, with full confidence, for some new interpretations,’ said Dora Ruždjak Podolski.

The brilliant Doris Šarić Kukuljica who is plays the main character Mare and who has, over the course of her illustrious career, played many of Vojnović’s characters, points out that it is precisely the female characters, who have their own strong attitudes and integrity despite all the hardships they face, which make Vojnović stand out. She added that Vojnović describes himself through them, describes the feminine aspect of his nature, and that plays such as Geranium must be put on in these times of pervading solitude, when we live together but seldom give ourselves to one another.

The rest of the Festival Drama Ensemble includes Irena Tereza Prpić as Marica, Nikola Baće as the professor, Jelena Miholjević as Pavle, Tena Nemet Brankov as Luce, Nataša Dangubić is the Aunt, Marin Klišmarić Vlado, Filip Detelić father and Toma, while mother and Zdenka are played by Iva Šimić and Haron by Romano Nikolić.

Director Marina Pejnović, who has exceled at the last year’s 69th Dubrovnik Summer Festival with her horizontal reading of Držić’s Countdown, asserted that the inclusion of Šoljan’s Island was only logical as it shows how it is possible to be lonely even in a crowd, especially when there is someone like Mare of Geranium who chose to be alone, who chose her solitude. She also emphasized that the play uses almost cinematic cuts and jumps, and frames situations to translate the complexity and structure of Vojnović’s literary debut.

The young director Pejnović is present in Dubrovnik through the Marin Držić Theatre where she put up Luigi Pirandello’s To Clothe the Naked and Tena Štivičić’s Can’t Escape Sundays. In 2015, she was the recipient of the group Rector’s Award for the collaborative opera projects by three arts academies of the University of Zagreb: Madame Buffault, Orfeo ed Euridice, The Nightingale and Carmen. Along with Pejnović and the young dramaturge Ivan Penović who jointly adapted the Vojnović work for the stage, the creative team consists of costume designer Barbara Bourek, set designer Zdravka Ivandija Kirigin, while the music was done by Josip Maršić and the lighting by Elvis Butković. Linguistic advice was provided by Maro Martinović. Assistant to the dramaturge is Antonela Tošić, Virginija Bolfek the stage manager. Flower design was done by Vesna Sretović-Čeljo. 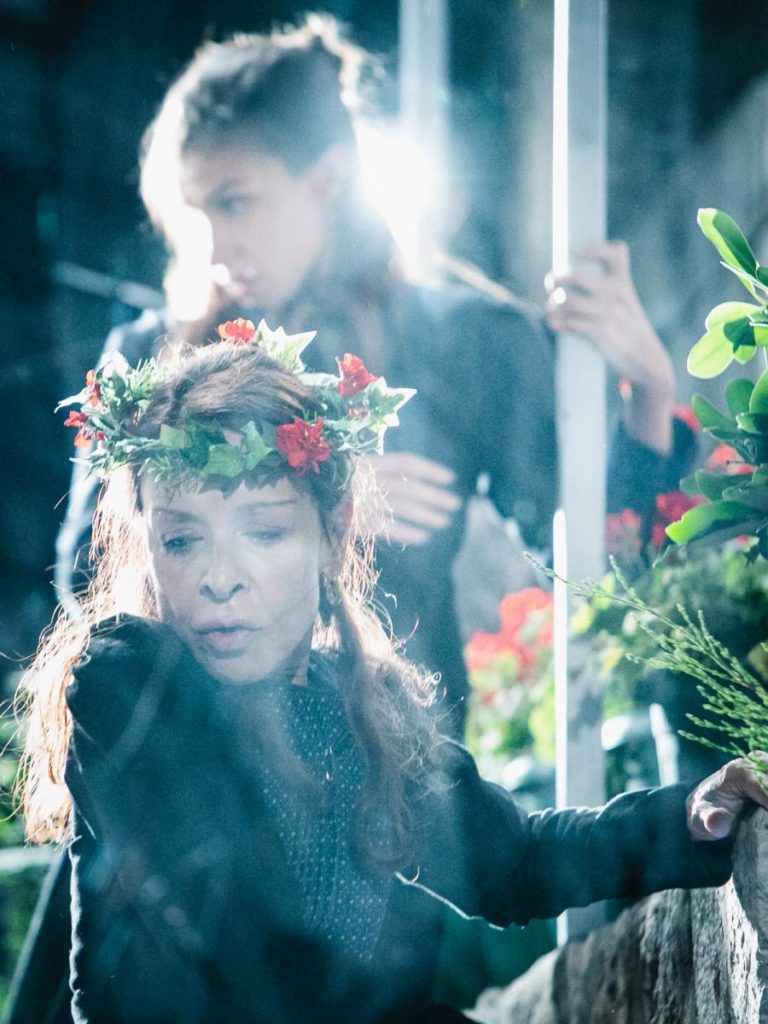 The long-time partner and sponsor of the Dubrovnik Summer Festival, OTP Bank, is the generous sponsor of this play. On that occasion, Director of the OTP Bank Business Center Dubrovnik and Southern Dalmatia Josipa Vodenac presented the Festival’s Executive Director Ivana Medo Bogdanović with a donation cheque, and said: ‘We are incredibly proud that the OTP Bank has been a partner of the Dubrovnik Summer Festival for more than 25 years. The Festival’s importance for Croatian culture has been well established and recognized and we are glade to be a part of its realization. We are especially glad to sponsor a work by our eminent Dubrovnik writer Ivo Vojnović, who is an outstanding figure of Croatian Modernism and one of the last great writers of Dubrovnik, at the grand anniversary 70th Dubrovnik Summer Festival.’

Geranium will premiere on Friday, 20 August, in the Art School Park at 9.30pm with performances scheduled at the same time and place the following days, until 24 August. The Dubrovnik Summer Festival gratefully thanks Križek Jewellery, Michal Negrin, and Festival Shop for providing the jewellery for the play, as well as Tekstilpromet for their support of the production.

Tickets for the play are available for purchase at the Dubrovnik Summer Festival website www.dubrovnik-festival.hr or via www.ulaznice.hr ticketing service and at the box office of the Festival Palace (Od Sigurate 1) every day from 9am to 9.30pm. All residents of Dubrovnik-neretva county are offered a 30% discount on all tickets. Purchases made with Mastercard® and Maestro® cards receive a 10% discount while all purchases and orders over 500 kuna receive a 30% discount voucher for Festival souvenirs.