To the great joy of all culture lovers, the Midsummer Scene Theatre Festival returns this summer in a never more exciting, new outfit! The festival returns to Dubrovnik guided by the words ‘Unmask her beauty to the Moon’, which Laert says to Ophelia in The Tragedy of Hamlet. This year, actors will finally take off their masks and play under the moonlight.

After a hiatus caused by the coronavirus pandemic, the long-awaited seventh edition will take place from August 28th to September 5th. The very heart of Dubrovnik is becoming the theatre centre of Europe, and the rich programme will undoubtedly mark the summer season and attract many visitors from all over the world to the most beautiful city.

The Marin Držić Theatre is the Festival’s new home, and will this year offer one Croatian and one world premiere. The monodrama with elements of farce, ‘A Poor Player,’, subtitled as ‘melancholy comedy’ by  co-authors Filip Krenus and Sean Aita, was designed and written just for Dubrovnik, that is, as an imaginary link between Dubrovnik and London. The comedy, performed by Croatian actor and festival producer with a London address Filip Krenus, flirts with the idea of what a meeting between the Dubrovnik audience and an English actor, who ended up in the Mediterranean by mistake instead of the Baltic, would look like.

English actors extensively travelled the northern and central Europe in the sixteenth and seventeenth century, from Denmark to the Baltics and Poland, through Germany, all the way to Austria. Language barriers were bridged by clowning and dancing, until ‘foreign’ audiences became so accustomed to English actors that having them became a matter of prestige among the German nobility.

The scenography and costumes were created by one of our best illustrators and transmedia artists, Zdenko Bašić, with whom Filip Krenus is currently working on a new translation and equipment of Croatian ‘Tales of Long Ago’ by Ivana Brlić-Mažuranić. This project, as well as the announcement of the English translation of Bašić’s ‘Moon Shadows’, will be the introduction in the exhibition ‘Tracing Croatian Tales of Long Ago’. It is with this exhibition, that the author Zdenko Bašić will present himself to the Dubrovnik audience. 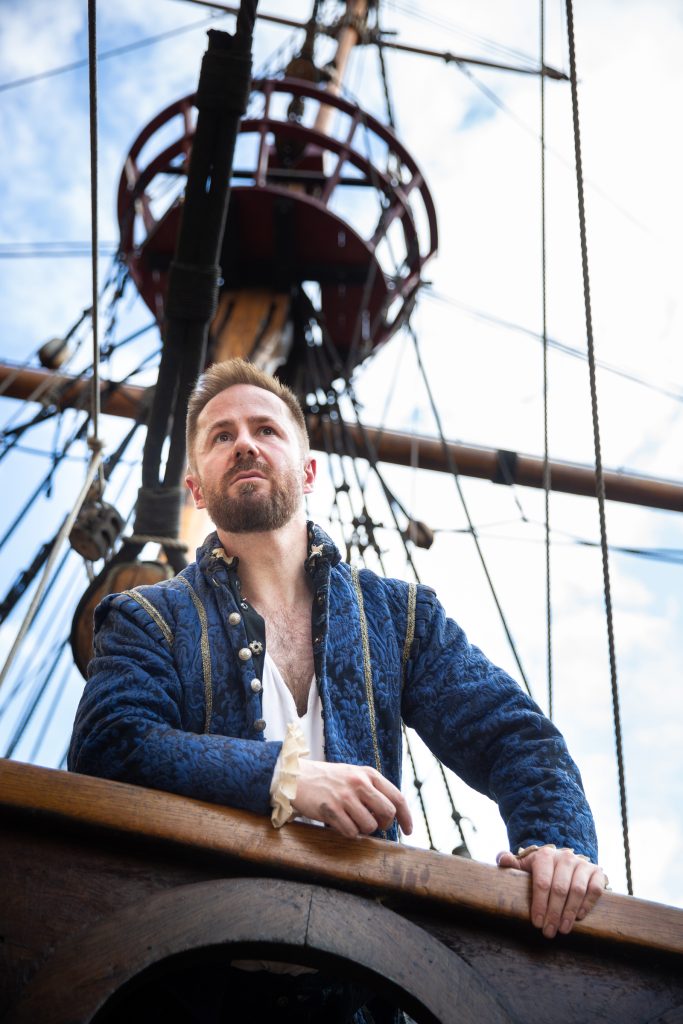 The Festival’s programme also brings a Spanish version of the play by Croatian author Ivor Martinić, ‘Would be a shame if the plants died’. It’s a drama about a love affair break-up. A break-up crisis starts when one of the characters can’t distinguish one important relationship event from the other. Through memories, the former loving couple tries to tell their story. It is a play about trying to express ourselves verbally and create a story that we can accept.
The structure of the work is open, meaning that each performance is different, and the actors use their own names, age, and biography.

The Spanish version of the drama ‘Would be a shame if the plants died’, talks about life in Barcelona through the experiences of the actors living there. The play was successfully staged at the La Badabadoc Theater in the 2020/2021 season and continues its journey on the tour of Spain.

The play stars Spanish actress Júlija Ferré and famous Argentine actor Victorio D’Alessandro. The author of the play, Ivor Martinić, our award-winning playwright, takes part in every production and actively communicates with the actors and the audience in order to discover the best version of his own text.

Visitors of this year’s Midsummer Scene Festival will also be able to enjoy a concert dedicated to the most famous songs from films and musicals performed by soprano and theatre artist Danijela Pintarić, accompanied by pianist Mate Žmak.

This year’s Midsummer Scene will be co-organized by the Marin Držić Theatre, with the support of the Dubrovnik Tourist Board and the City of Dubrovnik, and produced by Brilliant Events, Dubrovnik and Honeytongued Theater Productions, London. Find more information on their official web page www.midsummer-scene.com. 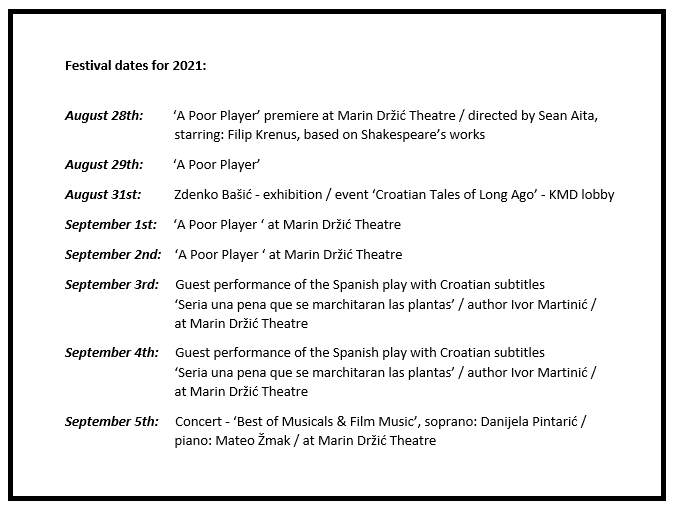