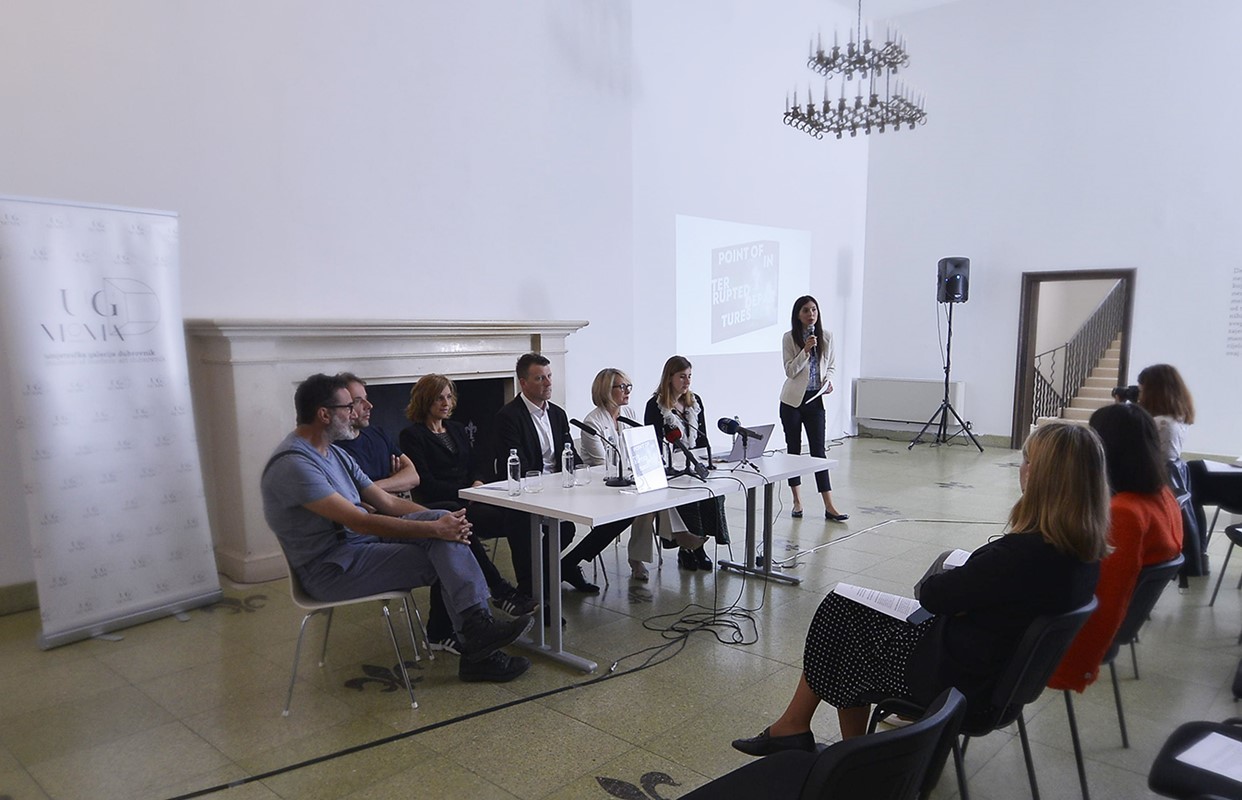 Once the most powerful Mediterranean trading points, Dubrovnik and Venice managed to coexist using skillful diplomatic strategies that reflected in today’s context by signing a historical town-twinning agreement in 2012 that puts forward the agenda of strengthening cultural exchanges between sister cities. The group exhibition Point of Interrupted Departures presenting three internationally acclaimed artists from Dubrovnik hence presents a fulfillment of the cooperation agreement with Venice welcoming a large-scale contemporary art exhibition. Rather than solely focusing on their rich heritage, with this project both cities put an emphasis on the contemporary moment and the demonstration of the strong contemporary art scene presence.

GROUP SHOW: POINT OF INTERRUPTED DEPARTURES
Boasting a spectacular 600 m2 space, the group show gathers Dubrovnik born and bred artists who graduated from the important European art centres (Marijana Pende at the Accademia di Belle Arti, Venice, Izvor Pende at the Kunstakademie Dusseldorf and Slaven Tolj at the Academy of Fine Arts Sarajevo, coupled with numerous international art shows such as Documenta). The show deals with the issues of creating metanarratives and methods of domesticating the problems and stereotypes as well as simplifying complicated histories and truths in order to control them.
The power of examination in the art field and its ability to eroding the established and imposed functions in the society is a threat to the establishment and implementation of the idea of a disciplined society. The impossibility of a clear determination of the function of an individual in the society appears as an anomaly, a code error, which does not go along with the principles of the so-called The Social Contract with its aim of taming the individual by imposing the clear laws, rules and directions as well as a strict organization of the society.

The Point of Departures in the works of three artists represents the starting point of a movement that is not the square one and does not follow a clearly defined and visible path. In a society that measures its evolutionary impact as the movement always focused on the future and the direction of always moving “forward”, stopping and contemplating one’s own meaning of doing something appears to be a problem in the movement. The fear of stopping carries with it the fear of Lacan’s confrontation and identification with our own “self”, the recognition of our own defeat and the possible realization that our movement is meaningless, that our own so-called revolutions do not lead anywhere. Fear of riding on a train without the number and without the last station.
The layering of the work of three artists Izvor Pende, Slaven Tolj, and Marijana Pende elude the clear definition of the artwork and consciously explore their own work and practice by constantly interrupting their own point of departures and exploring the constantly new pathways. Its oeuvres are retained on the border between figurative/abstract binary oppositions, sculpture/object, performance/situation, artwork/drawing of the child, questioning the power of the border as a place of provocation of the divisions taken for granted.

Izvor Pende studied painting at Kunstakademie Dusseldorf. His artistic career began in 2002 while he was still a student when he received the first painting award at Kunstakademie Dusseldorf under the expert leadership of Professor Karin Rissa and Professor Markus Lupertz. In 2002 he enrolled in the master studies and graduated in 2005 in Professor Karin Rissa’s generation. He won the 2005 Ikob – Kunstpreis Nomination 2008 BAT (British American Tobacco), Hamburg. Since 2003, he has exhibited his works at many individual and joint exhibitions in Bonn, Munich, Hannover, Dusseldorf, Hamburg, Chicago USA, and Eupen, Belgium. He won an award in 2008 and exhibited at BAT, Campus Galerie, Bayreuth, and institutions Cat., Germany/ Kunstverein Uelzen, Germany/ Gesellschaft für Bildende Kunst Trier e.V., Germany/ Kunstverein Bad Kreuznach, Germany. In 2010 he held his first solo exhibition in Bačva gallery, Croatian Association of Artists, Zagreb, Croatia. After that he was individually presented at significant museum institutions such as 2010 Art Workshop Lazareti, Dubrovnik, Croatia, 2011 Glyptotheque, Croatian Academy of Sciences and Arts Zagreb, Croatia, and 2014 Museum of Modern Art Dubrovnik, Croatia. In 2016, after two years of work and research, Pende exhibited at the Art Workshop Lazareti, Dubrovnik and presented his cycle of abstract paintings. He started an artistic dialogue with the German painter Daniel Richter in the project “Swimming Together” where the two painters present themselves at the most significant museum institutions, 2017 Museum of Fine Arts Split, Croatia, 2018 Museum of Contemporary Art, Zagreb / Museum of Modern and Contemporary Art, Rijeka. The works of Izvora Pende are kept in a private collection of Sammlung Gabriele Henkel, Düsseldorf, and at British American Tobacco, Hamburg. Lives and works in Dubrovnik. 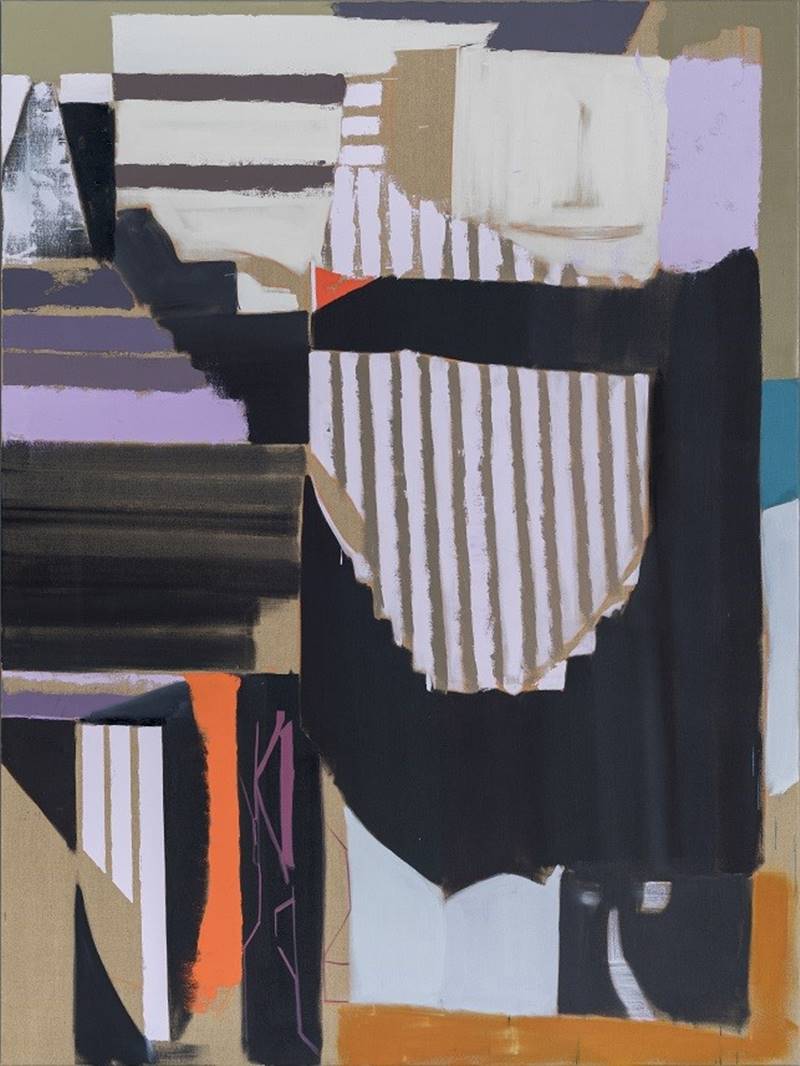 Slaven Tolj is one of the most famous artists on the Croatian contemporary art scene. His radical and minimalist practice involving performance, photography, ready-made, situations and objects deals with specific social facts and historical events. At the beginning of his career, in the 1990s, he focused on the situation in his own country, on the collapse of Yugoslavia, the war in Croatia, especially on the siege of Dubrovnik, his hometown.
Later, in the post-totalitarian context, he develops a broader scope of research that includes topics related to globalization and multiculturalism. Tolj performed a number of performances and actions and participated in numerous exhibitions in Croatia and abroad.
In 1988, Slaven Tolj founded the Art Workshop Lazareti, one of the most active places of contemporary Croatian art practice, focusing on the interaction between contemporary art and social change which has significantly influenced on the visibility and affirmation of the contemporary Dubrovnik / Croatian visual scene. He is the director of the Museum of Modern and Contemporary Art in Rijeka and the artistic director of Rijeka – European Capital of Culture 2020. 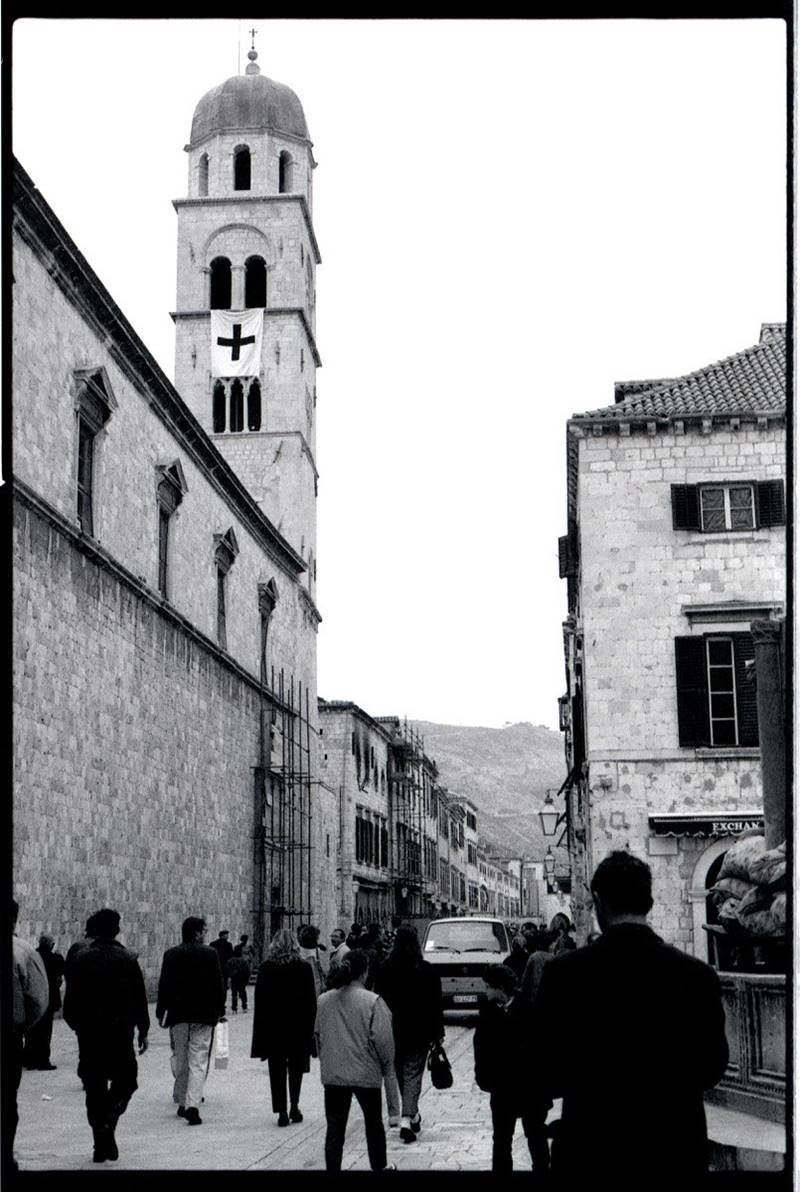 Marijana Pende enrolled in the Accademia di Belle Arti di Venezia in 2002 where she attended the sculpture class of Professor Andrea Grassi. In 2003 she was elected to participate in the sculpture symposium Accademia di Belle Arti di Venezia where her sculpture was presented in a public space at the border Sant Andrea Standrez – Gorizia, Slovenia – Italy. During her studies, she pursued her interest in various media: mass media, scenography, arts and contemporary music 2004 –2008. She joined Professor Roberto Pozzobon’s class Scultura installazione, and in 2005 she was elected to participate at the 51 Biennale di Venezia, Atelier Aperti, Accademia di Belle Arti di Venezia. Also during her studies, she began exhibiting at joint exhibitions. In 2008 she graduated Arte e musica contemporanea under Professor Nicola Cisternino. After this, also in 2008, she took on a residency at Kulturamt Frankfurt am Main where she presented Dubrovnik for the first time. In 2008 she exhibited at joint exhibitions Dubrovnik’s contemporary artists, Gallery Prsten, Croatian Association of Artists Zagreb / Museum of Modern Art Dubrovnik; CLASSROOM 01 Museo Madre, Napoli, Italy, REFUSES, Arsenale, Venice, Italy, 2010 EMOTION TO COHABIT, Galleria d’Arte Moderna, Palazzo Forti, Verona, Italy / Museum of Contemporary Art, Zagreb Croatia. To date, she has exhibited three times at the Triennial of Croatian Sculpture, Glyptotheque, Croatian Academy of Sciences and Arts, Zagreb, Croatia (2012,2015, 2018). Since 2014 she has exhibited her works independently at institutions: Museum of Modern and Contemporary Art, Rijeka, 2016 Glyptotheque Croatian Academy of Sciences and Arts, Zagreb, 2017 Museum of Contemporary Art Istria, Pula, 2017 Museum of Modern Art Dubrovnik (project), 2018 Palazzo Costanzi /Trieste Contemporanea, 2019 Museum of Fine Art, Split. Lives and works in Dubrovnik. 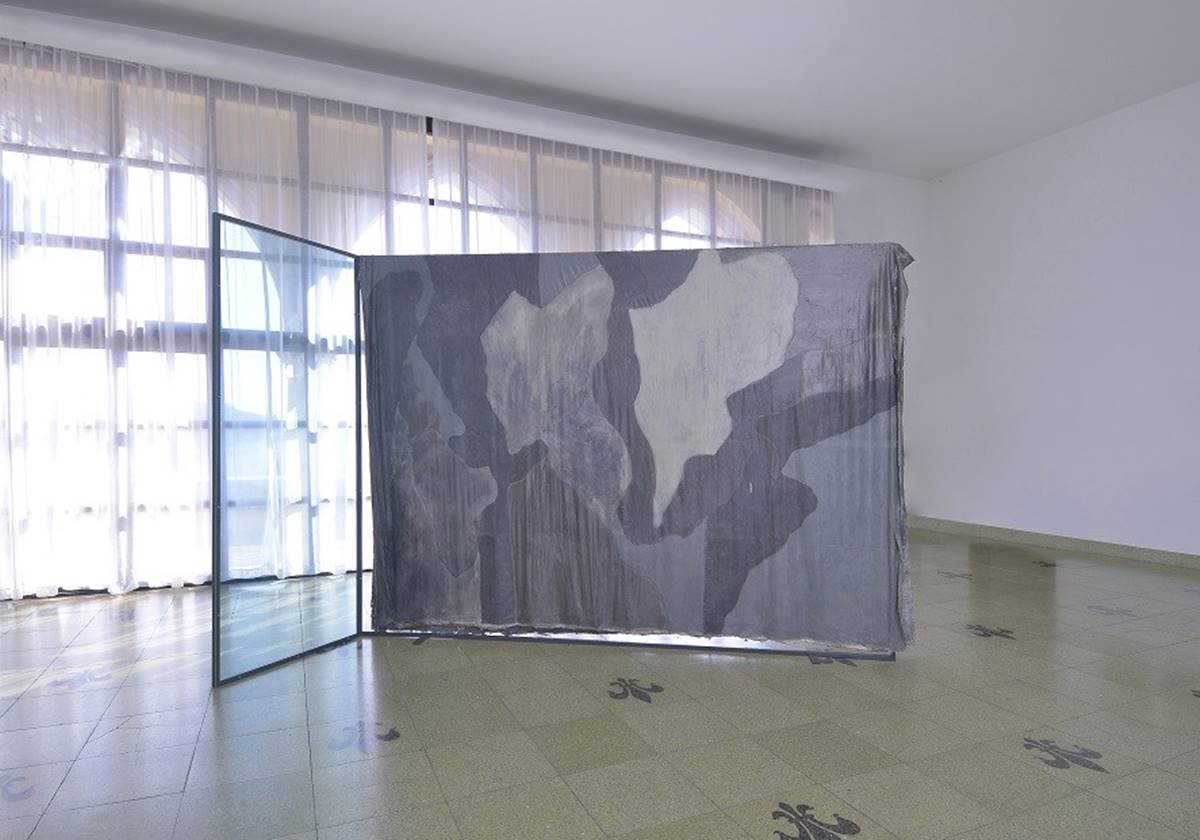 ARSENALE NORD, TESA 100
The Venice Arsenale, that used to be the heart of the Venice naval industry from the XII century, is a completely renovated location which reveals the grandness of the old Venice shipyard. One of the largest production centres of pre-industrial age, with thousands of operators employed, it was not just considered a shipyard but also the pulsing heart of the power and military strength of the Republic of Venice, a former city-state that competed for the domination of the Adriatic Sea as well the salt and trade monopoly with the Republic of Ragusa, today Dubrovnik. 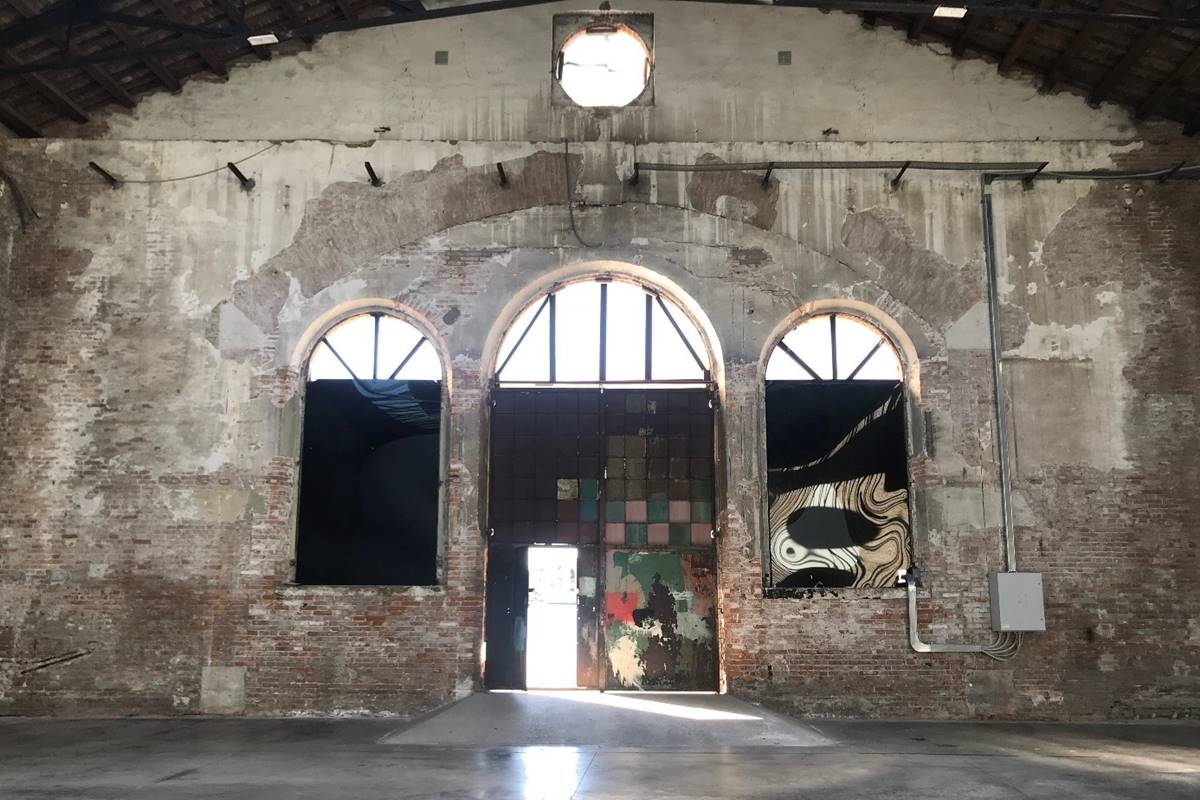 MUSEUM OF MODERN ART DUBROVNIK
The foundation of MOMAD is based on national art from the turn of the 19th century, but its interests lie in everything that happened after that, especially the contemporary moment of Croatian and international art. That is why it is necessary to sync the content, create an interaction between the past and present, and local and international spaces with the aim of achieving a clearly profiled, long-term and fruitful activity with the tendency of further growth and development.

In 2002 and 2003, the Museum of Modern Art Dubrovnik cooperated with Catherine David, a world-renowned art historian, and manager at the Kassel Documenta X and Rotterdam Museum Witte de With. The result was the project and final exhibition Dubrovnik – Here and There / Dubrovnik – Ici et Allieurs. 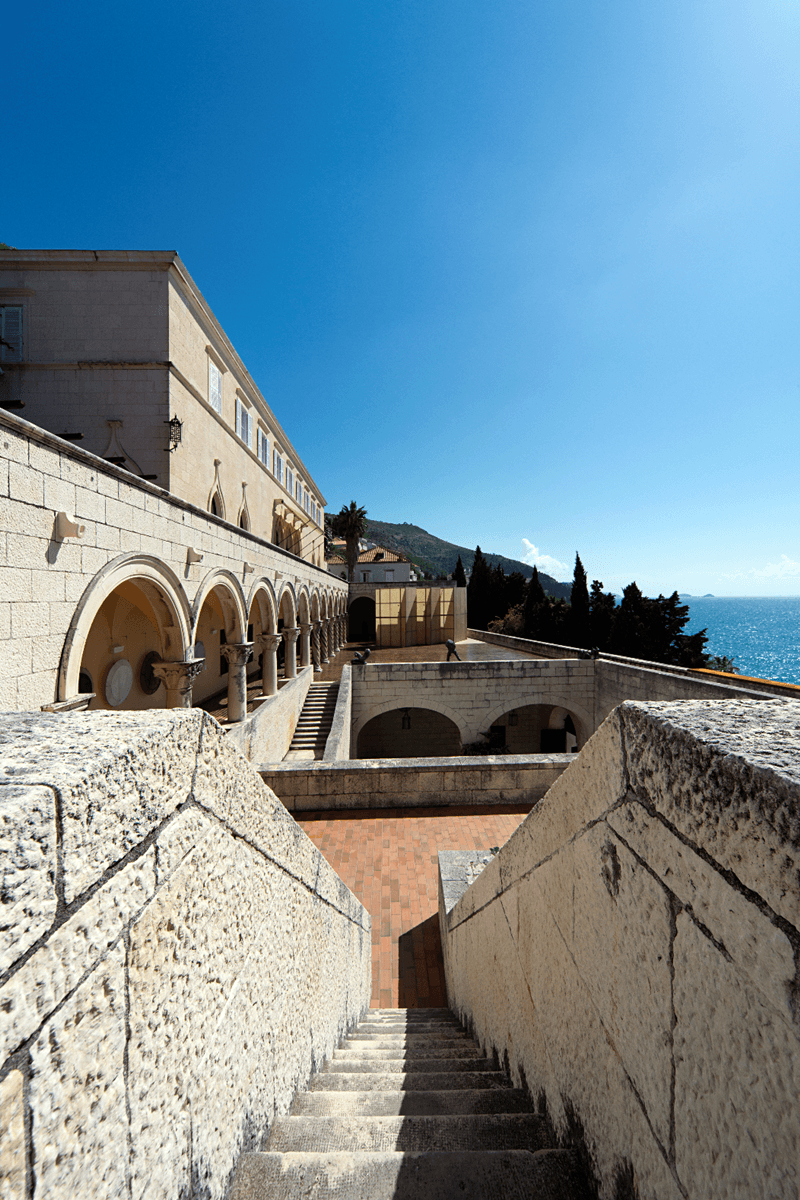 Likewise, in the summer of 2002, an international exhibition Perception was set up in cooperation with the French gallerist Jean de Breyne.

In cooperation with the Kunstmuseum Mülheim, a der Ruhr in der Alten Post and private Swiss collectors, the exhibition of Pablo Picasso’s prints was presented in the summer of 2008. In 2009, there were two international exhibitions: Jan Fabre – Borrowed Time / Le temps emprunté and, in cooperation with the ETH’s Collection of Prints and Drawings from Zurich: The American Prints from the 1960s to Date. In 2010, Albert Giacometti’s sculptures, paintings, graphics, and drawings were exhibited under the name of Alberto Giacometti – The sculptor of the 20th Century Soul, thanks the cooperation with Kunsthaus Zürich/Giacometti Foundation. Francis Bacon’s artworks from the collection Ravarino were presented at the exhibition called The Boundaries of the Mind, while the big exhibition of the famous photographer Ahmet Ertug was realized in 2017. In 2018, the Museum of Modern Art Dubrovnik presented the exhibition Oceans. Imagining a Tidalectic Worldview in cooperation with the collector Francesa von Habsburg’s Thyssen-Bornemisza Foundation and TBA21 Academy.