First theatrical premiere at the 66th Dubrovnik Summer Festival, play The Elementary Particles after the novel Les particules élémentaires by Michel Houellebecq, directed by Ivica Buljan and performed by the Festival Drama Ensemble, will be performed on Monday, 20th July at 9:30 pm on the Lovrjenac Fort, followed by three additional performances on 21st, 22nd and 23rd July.

The Elementary Particles is an award-winning novel by a controversial french author and a poet Michel Houellebecq published in 1998, since then adapted many times in multiple European countries such as Germany, France, Spain and now, Croatia. Novel, written in a brutal style, unsurpassed in its ability to hit where it hurts the most and to unravel the very core of a human being, is considered to be a kind of an essay about the ending of the history and a complete decadence of modern Western society. The passive and indifferent protagonist, Michel (Stipe Kostanic) and his step-brother, erotomanic Bruno (Marko Mandic) are symbols of the two extremes of a modern man and a modern Western civilization.

The first concept of the performance was different. Velimir Grgic’s adaptation and Aleksandar Denic’s scenography were precisely related to Kupari. It was supposed to be a classic adaptation of the novel, but when we the County gave up the funding and police intervention was required, we moved the performance to Lovrjenac Fort and I decided to treat these problems as advantages and so the concept was adapted to the new space. Instead of earlier narratives, told from two periods, childhood and a more mature age of the protagonists, I’ve unleashed a full theatrical potential of the novel. The play is actually placed between a performance, musical and political theatre. – said the director.

Ivica Buljan is a renowned Croatian and European theatre director and currently the executive director of drama in the Croatian National Theatre in Zagreb. He directed all over Europe and abroad, in Slovenia, Lithuania, France, Hungary, Portugal, Belgium, Russia, Montenegro, Ivory Coast, Italy and Serbia, while his performances were hosted at important international festivals, but this is his first cooperation with Dubrovnik Summer Festival.

The premiere of The Elementary Particles at 66th Dubrovnik Summer Festival is a part of the Rendez-vous, festival of France in Croatia. 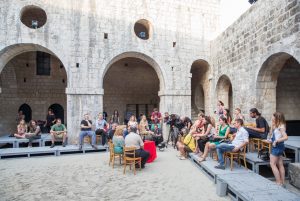