Euripides’ play ‘Medea’ directed by Tomaz Pandur had its premiere at the 63rd Dubrovnik Summer Festival. It will soon enter the stage again, in Cyprus on the occasion of 18th International Festival of Ancient Drama. The play is scheduled for the 4th and 6th of July.
After two successful seasons at the Dubrovnik Summer Festival, three in the National Theatre in Zagreb, and after several tours around Croatia and the region, last April Medea also visited the prestigious Ibero-American Theater Festival in Bogota, Colombia. The play was awarded by ovations from the audience, and the same scenario could repeat itself in Cyprus.
The International Festival of Ancient Drama is an annual event that brings together theater ensembles from around the world. 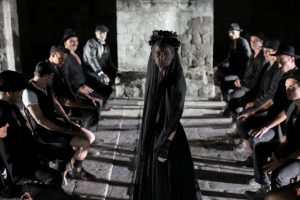