At the 22nd International Tourism Fair in Barcelona, a special promotion dedicated to HBO’s Game of Thrones was held today.  A presentation, ‘Croatia as a film destination’ by the Croatian National Tourist Board in Madrid and Dubrovnik Tourist Board, presented maps of filming locations in and around Dubrovnik.

The location maps which show where the hit TV show was made will be implemented in the new tourist offer of the city of Dubrovnik.

Promotions will also continue tomorrow as the Iron Throne arrives to the fair.  In May,  a competition for the best Game of Thrones  fan photo will be held as part of the initiative. Fans of the show will be able to take a themed Game of Thrones photo to compete for a great prize – an plane ticket to Dubrovnik, and a  stayin one of the city’s hotels.

The sponsor of the prize is the Vueling  tourist agency who runs direct flights from Dubrovnik to Barcelona from 3rd April to 23rd of October.

The TV show Game of Thrones will move borders and remove all distance between Croatia and Spain this coming summer. Next Monday in Barcelona all of Dubrovnik and Split’s beauties will be shown on a big screen during an official promotion of the fourth season of GOT. 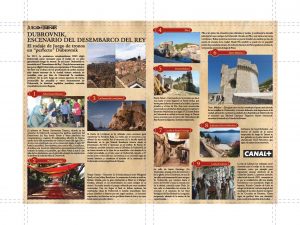