Emily Janelle Santos will forever remember TIC Pile and the city of Dubrovnik, where her partner Sherwin Cordero unexpectedly proposed to her today. After eight-years spent together young Filipino residing in Australia, proposed to his girlfriend with a short film compiled of their group pictures. In the last scene of the movie he virtually declared his love and asked ‘Will You Merry Me?’. Emily burst into tears before she said ‘Yes’, and then they kissed for the first time as fiances.

The romantic moment was organized by the VSP studio on the premises of the Dubrovnik Tourist Board. Romana Vlasic, the director of the Tourist Board, prepared a gift for the newlyweds to be, and invited them to spend their honeymoon in Dubrovnik, one of the most romantic cities in the world. 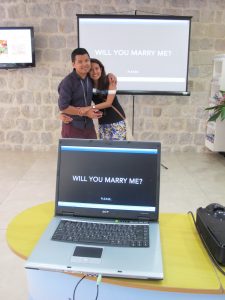