Dubrovnik is known as the most popular tourist destination; every day thousands and thousands of people are coming to the Pearl of the Adriatic, but only some of them know the history of the city. Journalists of InDaily magazine are among those who has noticed that the town was seriously ‘wounded’ during the last war. In their article about the City, they presented Dubrovnik with all its beauties, but also with all its injuries whose traces are still visible everywhere in the city. Read the full text below:

‘War was not what we expected when we arrived in Dubrovnik’s Old Town. We had come walking the medieval ramparts, gaze at the sapphire blue of the Adriatic Sea, and stroll narrow lanes and the wide thoroughfare of the Stradun, stopping for ice-cream whenever the whim took us.

Luza Square marks the end of the Stradun and is a vision from a fairytale. Watched over by Maro and Baro, two life-sized brass bell ringers in the city’s bell tower, the Square welcomes up to 10,000 visitors a day during peak season, almost all of them day-trippers from the many cruise ships making their rounds.

If cruising is not your thing and you are lucky enough to have checked into one of the few hotels, or rented a local’s apartment, as we have (a wardrobe full of clothes and drawers full of knick-knacks included), you will welcome the twilight transformation of the Old Town as the cruisers leave through the Pile Gate to return to their ships.

We are surprisingly few, us over-nighters, and it feels like an enormous privilege to be left behind with all this beauty. The wide limestone paving of the Stradun is worn smooth and shining by tourist footfall (no cars are allowed inside the city walls), and this evening it reflects a gathering storm.

We have planned to walk the wall then find a laneway restaurant for dinner, but when the rain starts we are forced to change our plans. We shelter under the colonnade skirting the Sponza Palace and notice a small sign advertising an exhibit of war photos.

The photos were taken during the Siege of Dubrovnik, in 1991. This history has been asking us to recognise it ever since we arrived. All around the city walls there are large boards recalling the Croatian War of Independence and the destruction of Dubrovnik. If they didn’t exist, you might never know there had been a war here – the city walls have been repaired, the burned buildings have been rebuilt with bright terracotta tiles replacing their shattered roofs, and tourists fill the shining town in even greater numbers than they did before the conflict.

The only reminders are pockmarks from bullets and shrapnel, and sombre plaques of remembrance on unremarkable houses in almost every street inside the thick, but not-so-protective, walls of the town.

There is one in particular. It is black and white: three men and a dog taking shelter on a stairway between thick stone walls. Where the stairs end it is black, perhaps a door is closed to them; no light comes from it; it offers nothing but its stoop. The men are not related, not even friends, as far as I can tell. There is no connection between them, no eye contact, no reassuring gestures. An old man stands on the top stair. He’s wearing a suit jacket and tie, and what looks like a black beret over thin hair. His face reveals nothing of his state of mind, but he presses his back against the wall, like a child having his height measured. He wants to flatten himself, sink into the wall’s protective façade, and disappear. 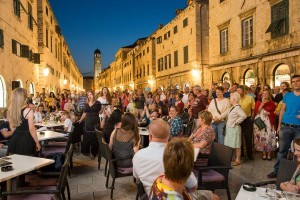 Crouched in front of him is a middle-aged man, though it is only his dark hair beneath a cloth cap, and his ordinary clothes, that hint at age. He bends his head toward his knees, his face is hidden and he is holding his hands over his ears. I can hear the echo of bombs, but they don’t make my heart pound or twist my bowel like they do his – anyone would recognise his terror.

Then, on the bottom step closest to the corner of the wall protecting them, is a man in polished shoes. His left hand, the only blurred image of the photo, is stroking the flank of an old dog. With his right arm, he holds the animal around the head, muffling the fearful sounds. His expression is that of a father soothing a child, pretending calm.

The photographer, Pavo Urban, was 22 when he took these images. He must have stood in the street to capture these men in their fear – except for the soothing hand, the photograph is crisp; time has been taken to focus and achieve depth. He took a risk.

I look back at the other photographs – he took many risks to document the destruction of his beloved city, and to honour the experience of its people. Between two buildings a group stand waiting – is that what war is about? Waiting for something to happen, good or bad?

The ground is carpeted in debris, and dark stains make me think of blood. A woman, not young or old, with a white scarf around her head, leans against the edge of a building – she is peeking around its corner. With the group so far behind her it is as if she drew the short straw. They are all waiting until it is safe to go out into the street – the street where Pavo Urban must be standing.

The evidence is everywhere now. I look from one photograph to another and I can see people cowering or waiting, frightened or resigned, all relatively safe between buildings. The main thoroughfare of the Stradun is empty; not a person, not a dog, just a shroud of smoke or an explosion of fire. And yet, these photographs exist. It was not empty. A young man stood with his camera, shooting roll after roll of film, propping up what was being torn apart.

Pavo Urban was born in Dubrovnik in 1968. In September 1991, he enrolled in a film course at the Academy of Dramatic Arts in Zagreb, but within weeks Dubrovnik was under attack. Pavo returned home to became a war photographer for the Croatian Ministry of information.

That was the day Pavo Urban took photographs of a smoke-filled Stradun. It was also the day he photographed the plaza in front of Sponza Palace. I look at that photograph now. It is ghostly; a pall of smoke obscures everything. In the centre is Orlando’s Column – we admired it on our way into the Palace. Orlando is the legendary liberator of Dubrovnik, but in the photograph he is protected behind board; like the city’s walls, his sword and shield were useless against bombs and bullets. But the flag of liberty stills flies above it, intact. To me it looks hopeful, but I wonder how it looked to Urban, through his lens.

It is the last photograph he took; the last thing he saw. A moment later he was hit by a shell fragment, and he died at the city gate.

It is almost dark when we emerge from the Palace. The rain has stopped but lightning illuminates the darkening sky above the Stradun. It is an extraordinary sight, and all around us people have their cameras out ready to capture the next explosion of light for their holiday albums.

Our camera remains capped; our mood is solemn.

Through his photographs, Pavo Urban has shown us more of Dubrovnik, its people and emotional heart than we ever would have discovered alone. We stand, for just a moment, in remembrance.

Then we walk away from Luza Square and into the city’s network of tight lanes, grateful for the peace they now enjoy.’