We all know how destructive nature can sometimes be. One of the times it showed its true ferocity was precisely on this day, January 6, 1825. As it was written in ‘Gradoplov’ by Sebastijan Vukosavić, an almost hurricane storm knocked down our bellowed statue of Orlando which was returned to the main square more than 50 years after the incident.

The statue of Orlando was originally facing east. It remained in that original position until that tragic January of 1825 when it was demolished and stored deep within the Rector’s palace. At the time the Austrians were in control of Dubrovnik and were in no hurry to return Orlando to its former position. It lied forgotten in the Rector’s palace until 1878, when it was finally returned to the central town square. It was placed at the same spot, but this time it was facing north.

The Orlando statue is the oldest surviving public sculpture in Dubrovnik. For a long time, it was the only secular monument in the City dedicated to someone who is not a cleric. To this day, it is still not entirely clear who exactly Orlando was. Some believe the statue is a tribute to Roland, a brave knight that help defend the City against Saracens in the 8th century, while some think it might be a tribute to emperor Sigismund of Luxembourg. Such pillars are characteristic of Germany, and outside it there are only four such monuments, including this one. It was carved by the Italian Gothic sculptor Bonino da Milano. 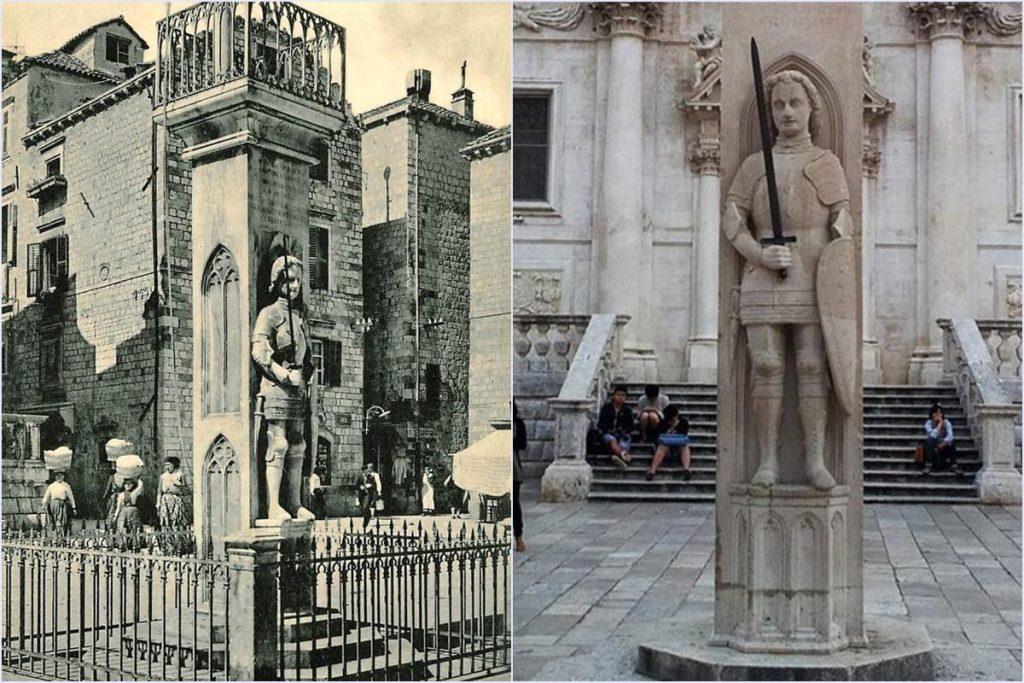 The statue of Orlando was a symbol of the political, judicial, and commercial independence of the Republic of Dubrovnik. In addition to being symbolic, it also had an everyday practical value. It served as a pillar of shame and punishment, as well as a place for celebrations and business. It was a place where government decisions were declared, ceremonies announced, and heavier punishments executed, that were sometimes very cruel. The defendants were tied to the pole and were forced to stay in that position for several hours, exposed to public shame. And if sentenced for a greater crime, they were whipped, their ears and noses cut off, and hot seals were pressed into their faces.

Public auctions and trade also took place right around it. People used Orlando’s elbow to measure various objects, fabric etc. The measure later became known as the Dubrovnik elbow (51.2 cm) and was subsequently carved at the foot of the pillar. Orlando always proudly served as a place for the state flag, the raising of which symbolised the beginning of the Dubrovnik Golden Age in 1419. Its removal marked the final demise of the Republic at the beginning of the 19th century.