Mali Ston oyster is native European species, the European flat oyster Ostrea edulis. Mali Ston Bay represents one of its last, healthy habitats in Europe. The specificity of Mali Ston oyster is based on the unique natural characteristics of Mali Ston Bay, a protected special marine reserve, as well as centuries long tradition and expertise of breeding oysters. The optimum quantity and composition of the food, the excellent quality of the sea water and the use of traditional know-how are directly reflected in the quality and organoleptic characteristics of this prized product, making it one of the world’s best. Mali Ston Bay is also one of the last locations in Europe where the sea quality is graded with an A mark, which allows eating oysters directly from the sea. 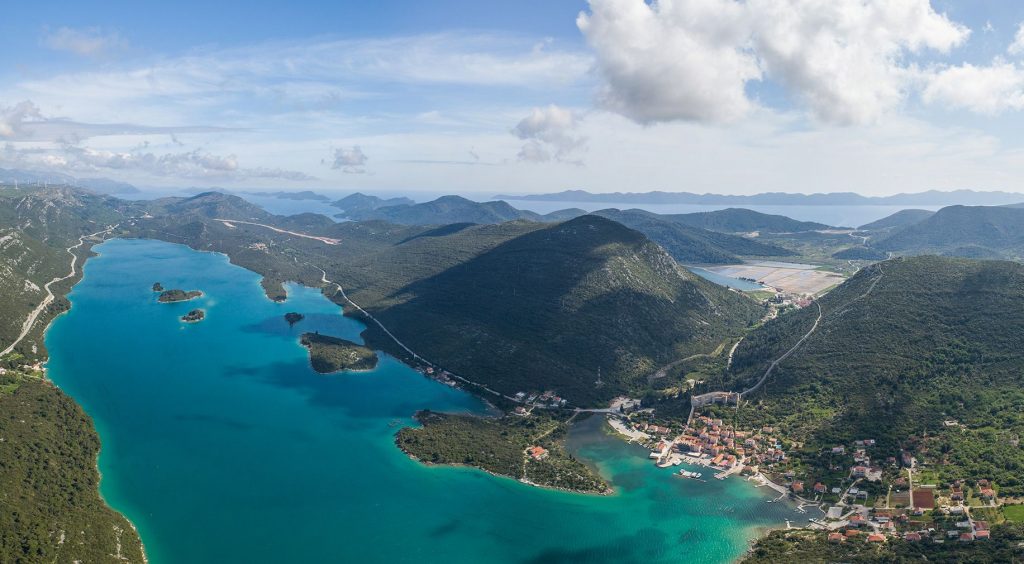 So, how do Mali Ston oysters taste like? To us, Mali Ston oysters taste like little drops of heaven. Like you have just immersed yourself into the sea. They are soft and succulent to bite with a specific, sweet and salty, balanced taste and a pleasant seamineral flavor dominated by an aroma of iodine that lingers on the palate. It is hard, almost impossible, to stop after eating one. In its prime, Mali Ston oyster has a greasy texture, glossy grey-white-yellowish, firm, domed and swollen fatty tissue or ‘meat’. The large amount of glycogen is responsible for the greasy texture of the meat which melts in the mouth, producing a distinct, sweet and full flavor. Mali Ston oyster, similar to other seafood, has a very high nutrient content. It is rich in proteins which are easily digestible, unsaturated fatty acids, carbohydrates, especially glycogen, vitamins and minerals. A perfect guilty pleasure.
Shellfish experts and nutritionists who tasted Mali Ston oysters give them an advantage not only in relation to the other oysters, but also in relation to the same species from other locations. They only have words of praise for it and evaluation – the tastiest in the world. This is confirmed by a Grand Prix and Gold Medal for quality awarded at the General Trades International Exhibition in London back in 1936.

The best way to eat them is… Directly from the sea, with just a few drops of lemon juice! But if you are not a fan of au naturel style, local restaurants serve them in dishes such as soups, risottos, pastas, pan fried with different sauces, grilled or au gratin. In its fresh form, Mali Ston oyster is the richest in so-called umami, the fifth flavor which provides us with a pleasant sensation on the palate, caused by nucleotides in the oyster’s muscle. Fresh Mali Ston oysters are best paired with a well-chilled traditional method (méthode champenoise) sparkling wine with brut, extra brut or brut nature label marks. Traditional method sparkling wines make a better choice than prosecco due to less residual sugar, firmer acid structure and additional umami which comes from ageing on the lees. When pairing local wines, it is best to look for light to medium structured dry white wines, with pronounced acidity and minerality. Such organoleptic qualities can be found in a local indigenous variety Pošip, which makes a true local match with Mali Ston oyster. The freshness of Pošip complements the saltiness of the fresh oyster, its moderate alcohols are rounded and soft for oyster’s succulent, sweet meat, while the minerality of the wine completely matches the minerality of oysters. The result of pairing Pošip and Mali Ston oyster is an extremely pleasant, savory taste which is harmonious, long-lasting and unforgettable. 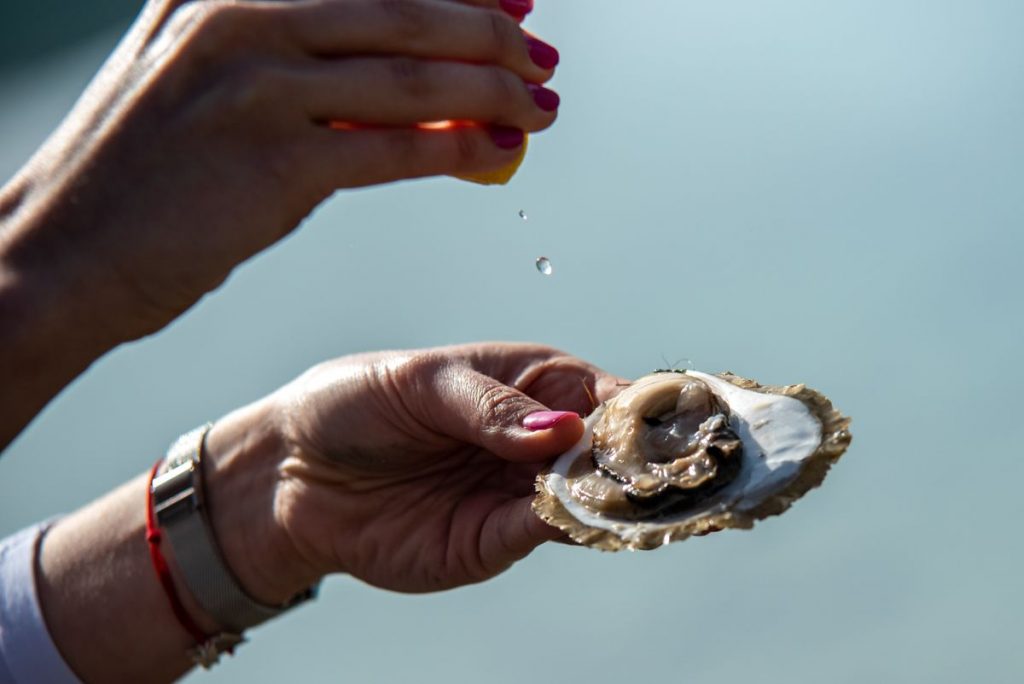 The taste of tradition… The tradition of shellfish farming in Mali Ston Bay with particular regard to oysters dates as far back as the Roman Empire. The first available archive record on how to gather oysters from natural nurseries and on semi farming in Mali Ston Bay dates from 1573. Archive records from the 16th and the 17th century show that the oyster farming was already well-established and in the hands of representatives of the Republic of Ragusa in Ston. The Rector of Ston was the only one who had the right to regulate this business. He issued concessions for those who made a commitment to farm oysters and give a certain part to the state. Parts of the bay which were used for oyster farming were divided into the plots that individuals rented. Mali Ston oysters were sold in košić (a round basket with a handle, made of young twigs from certain local bushes). Every basket had to be the same, so farmers took them to Ston for calibration. One sample basket was stored in Ston, and the other one in Dubrovnik in the office for scales. 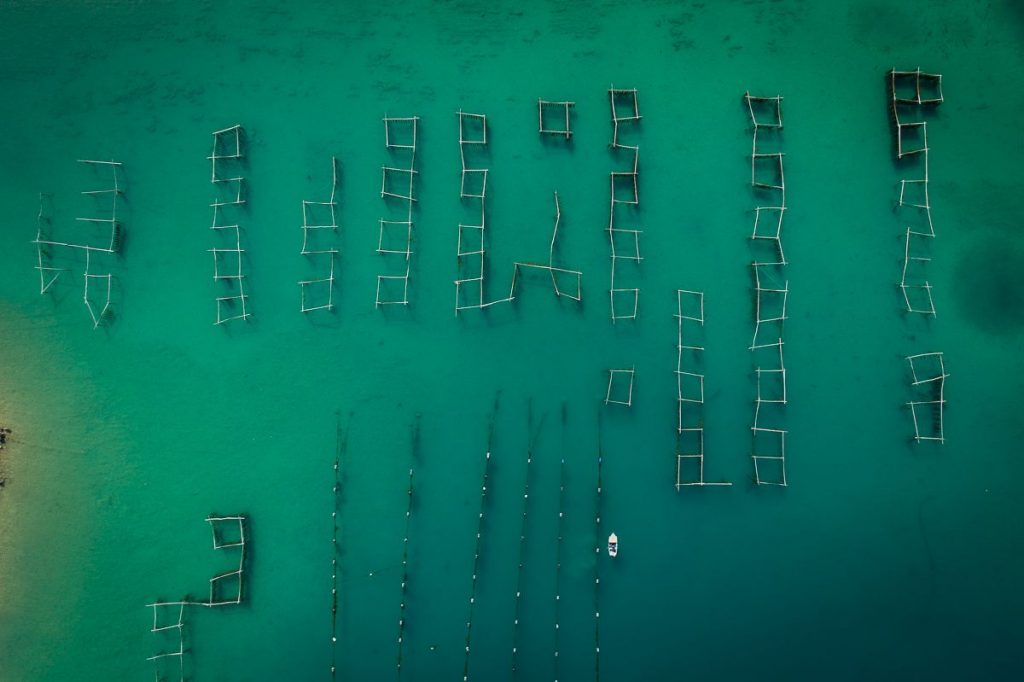 The oldest technology of Mali Ston oyster farming was based on throwing the oak, spruce or olive tree branches into the sea and extracting them with adult oysters. Every oyster farmer had a special location for throwing the branches, which he would extract after 3 years and then harvest the oysters. 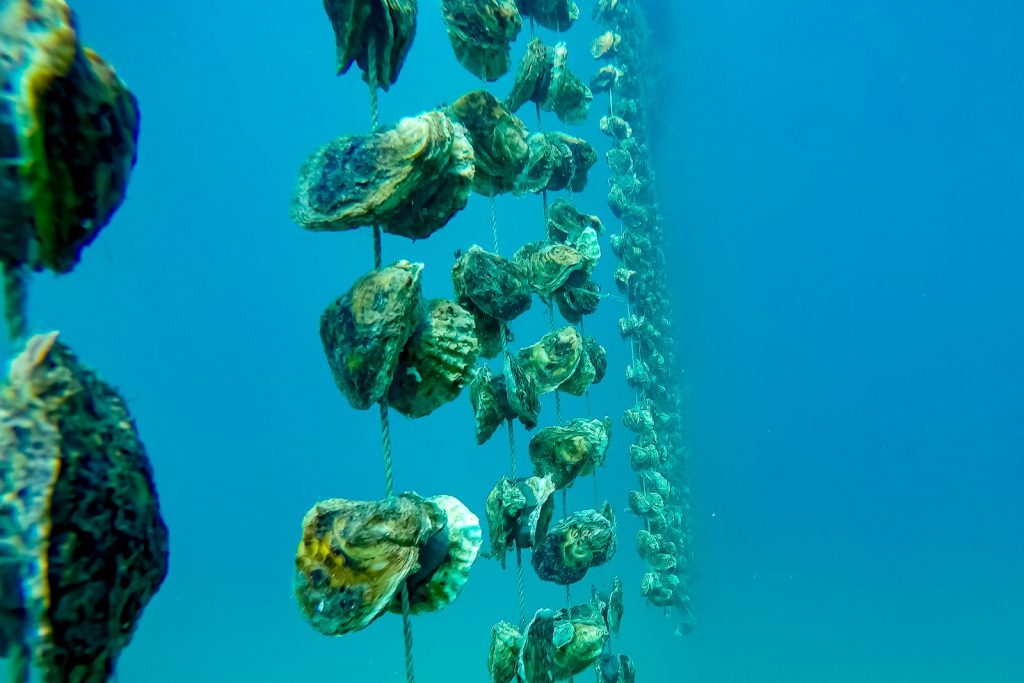 In Sutvid cove next to Drače in Mali Ston Bay, captain Stijepo Bjelovučić from a well-known shipowner family, founded ‘The first commercial oysters and mussels farm in Dalmatia’ in 1889. He significantly improved the farming technology and cultivation of oysters in this area. Oysters from Sutvid were awarded various diplomas and were exported to European cities such as Vienna, Prague and even Paris. 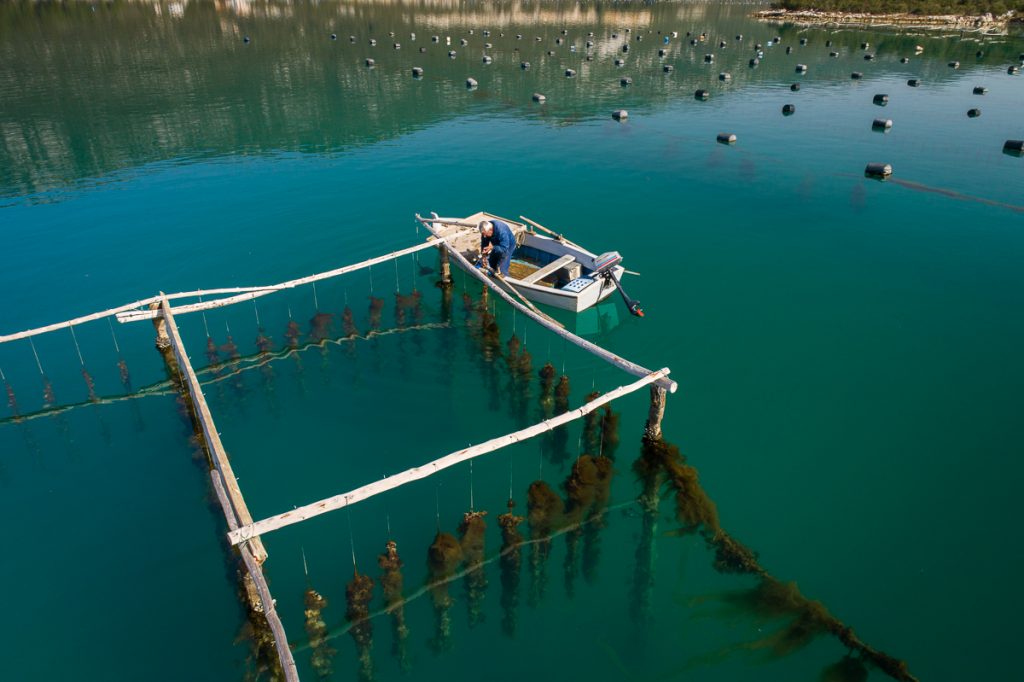 Today, farming of Mali Ston oysters occurs on floating parks. While the technology changed a bit, the oyster farming process remained 100% natural. The oyster spat is collected from the nature and the farming cycle from laying down collectors to reaching the market size of the Mali Ston oyster takes two to three years. During this time, each oyster passes through the hands of the farmer around 5 times, which makes it a hard and dedicated work. 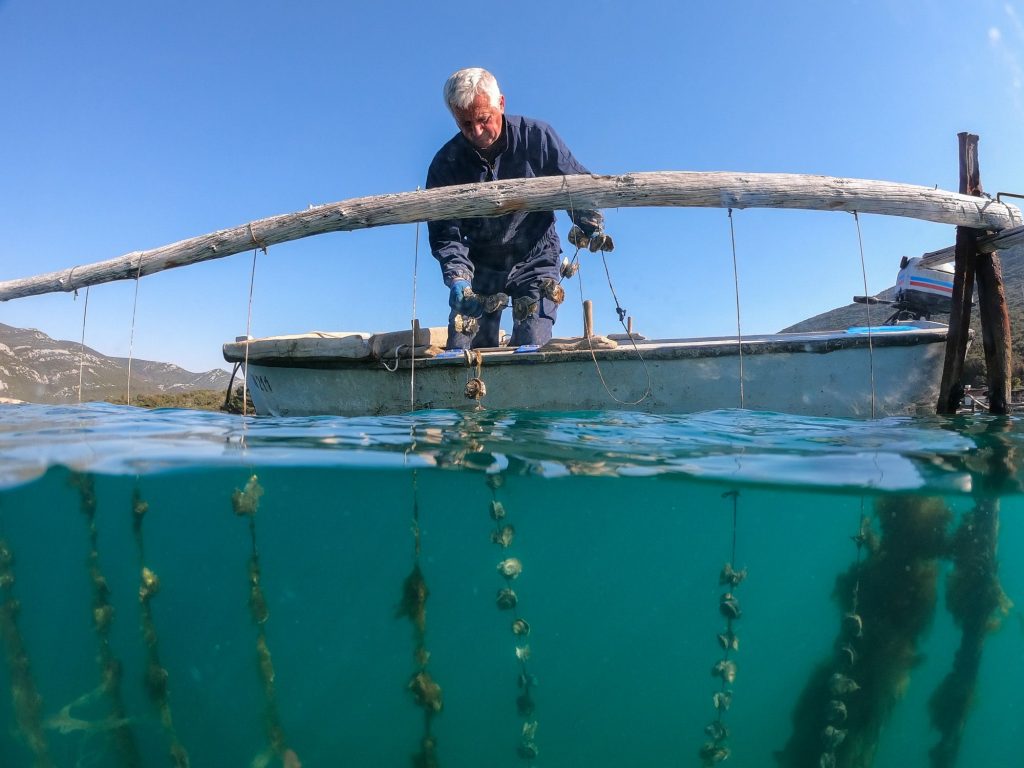 Only for real lovers… The Romans placed oysters high on the list of valued aphrodisiacs, while Casanova, according to the legend, ate 50 raw oysters for breakfast. In the times of the Republic of Ragusa, oysters were an irreplaceable food item at the renaissance feasts of the Dubrovnik nobility, who enjoyed and offered them to foreign envoys from all over the world. The magical properties of oysters were no secret to the Austrian emperors who often enjoyed them on their menus.
They came from Mali Ston Bay to Vienna by carriages, in special wooden crates. While it may sound just like a nice story, it is interesting to note that oysters are rich in essential nutrient zinc, which has an important role in male and female reproductive system. Raw oysters are also rich in rare amino acids which increase testosterone level. So why leave anything to chance? 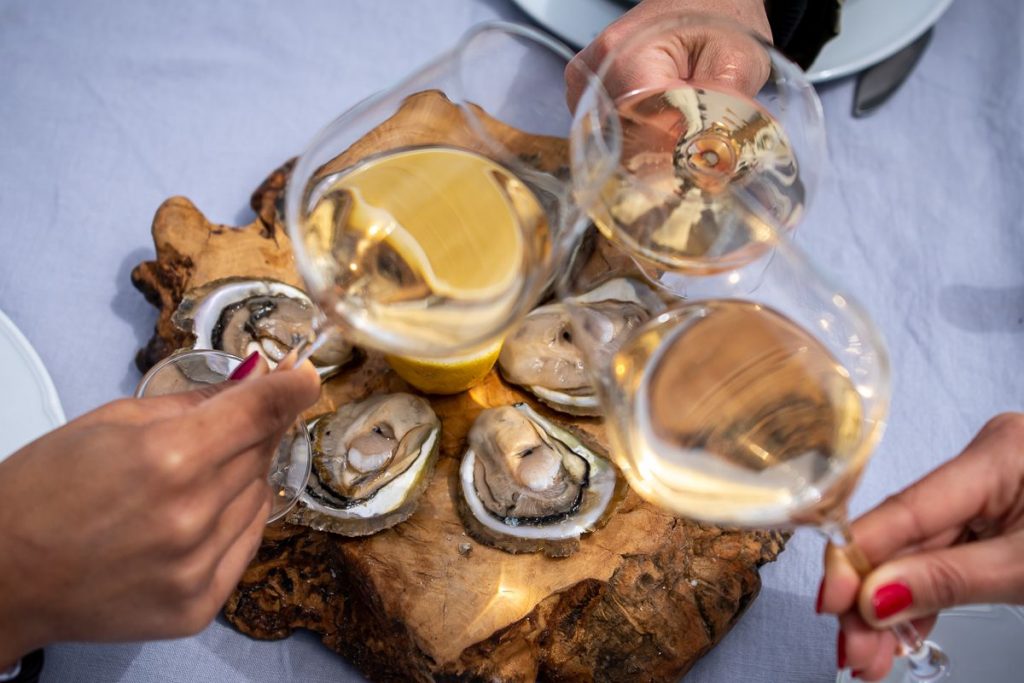 Day of Mali Ston oyster In 1993, a small group of enthusiasts restored one of the traditions related to Mali Ston oysters – the celebration of Saint Joseph’s Day on March 19th. Throughout the history, the celebration represented an opportunity for local people to enjoy Mali Ston oysters because during the rest of the year their high price meant that they were reserved only for the wealthiest. Every year, the traditional event ‘Day of Mali Ston oyster’ is held on that date. Many fans of this specialty enjoy the event and the attendance is growing from year to year. We do not exactly know how old is this tradition since there are no archive records about it, but the local papers from 1929 mention it as an ‘old tradition’, which indicates its long history.