In the year declared by the City of Dubrovnik to be Orlando’s year, four young and exceptional pianists will perform in Dubrovnik as a part of ‘Orlando Piano Week’ programme, which will take place from 26 to 29 August. In collaboration with the 7th Dubrovnik International Music Festival in the late summer, four pianists will hold recitals in the Rector’s Palace atrium.

American pianist Andrew Tyson made his first public appearance in August 2015 at the 66th Dubrovnik Summer Festival with a recital for which he received high praise from the audience and criticism. Performing all over the world, his thoughts returned to Dubrovnik and he and Evan Shinners proposed the visionary project now named Orlando Piano Week.

The central theme of this year’s festival, “Mirrors”, is inspired by Dubrovnik itself as a city in which past times and present realities mirror each other, and is also woven into the choice of performers as individuals of different personalities and artistic sensibilities, and in their programs that reflect different clips music histories connected not only by theme or title, but also by structures, influence, innovation and mutual imitation. Andrew Tyson, Steven Lin, Evan Shinners and Evgeni Bozhanov are four specific artists who represent different shades of a new generation of young musicians who are not afraid to question the established norms present in classical music. This magnificent cultural event starts on August 26th at the Rector’s Palace @ 9pm and it will be opened by the creator of the idea, Andrew Tyson. 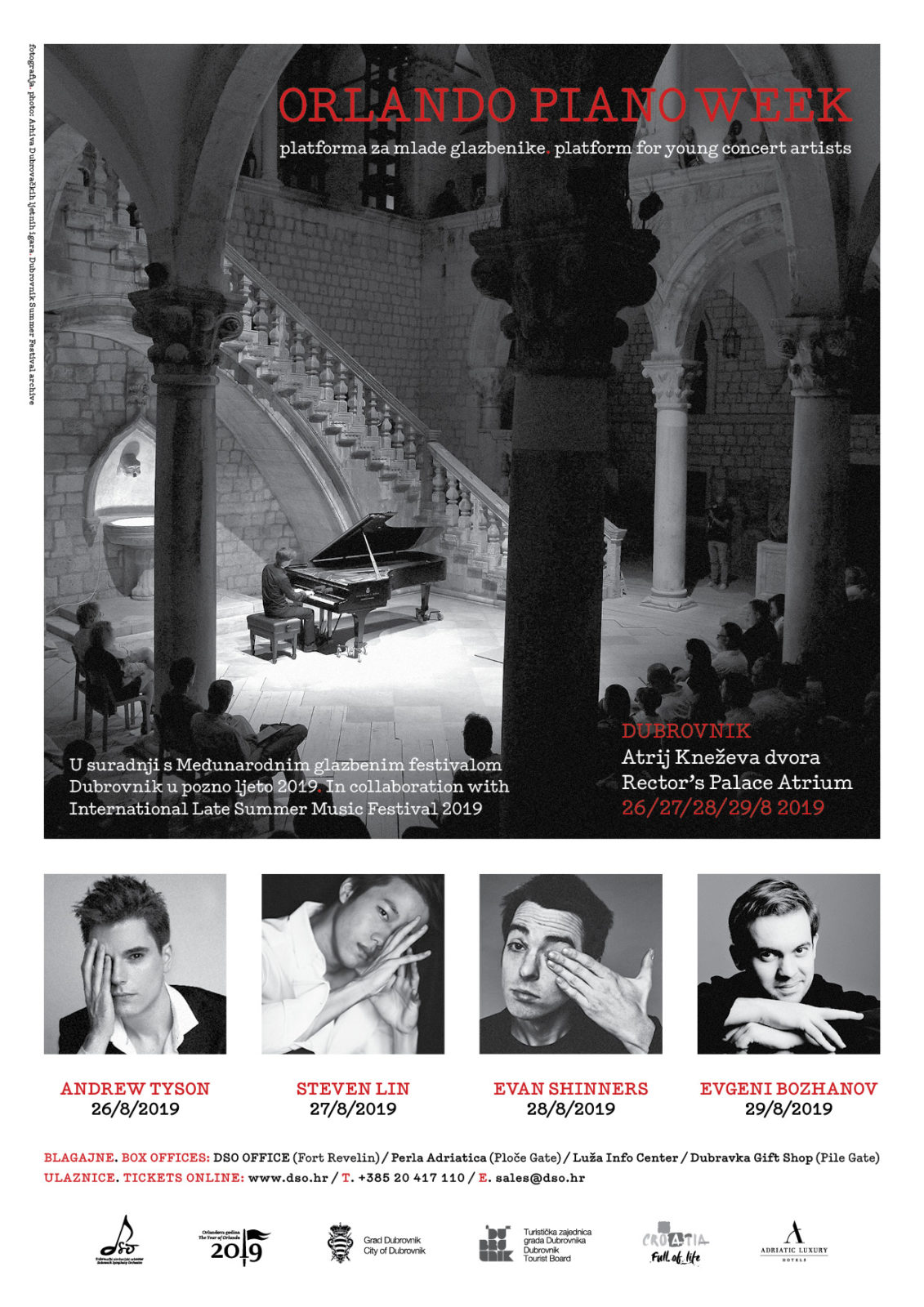 Praised on BBC Radio 3 as ‘The True Piano Poet’, Andrew Tyson is known for being a musician of a specific expression whose time is just coming. In the summer of 2015, he won the first prize at the Géza Anda Piano Competition in Zurich, as well as the Mozart Award and the Audience Award. The theme of the mirror prompted Tyson not only to think philosophically, but also to select specific compositions for his own recital. It will pair Dutilleux’s Game of Opposites with Ravel’s Mirrors.

‘The eclectic first part of the programme opens with two overwhelming works by Cécile Chaminade … Then we will hear Messiaen in religious fervor, after which we move on to the earthly passions of Liszt’s Obermann, Tyson explained.

The musical prowess of Taiwanese-American pianist Steven Lin was noticeable from an early age when he was admitted to Juilliard at the age of ten with a full scholarship, and his first appearance with the New York Philharmonic followed at just thirteen years of age. The New York Times describes his playing as “impeccable and enriched with amazing finesse in nuance and dynamics.”

His Dubrovnik debut will consist mainly with Romanticism era music, with which he also performed the work of his friend David Hertzberg, a contemporary composer of the romantic spirit. The program brings a pearl from Chopin’s oeuvre, Ballad no. 1 in G minor, Op. 23, a work that the composer himself held to be his most beloved and intimate work, then one of Beethoven’s sonorous and most caring sonatas, Sonata no. 18 in E flat major, known as The Hunt, the Sonata in G minor for the slightly less acclaimed, but composer-like, intriguing compatriot and younger contemporary of Rachmaninoff and Skryabin, Nikolai Medtner, and finally the Mephist Waltz, the magnificent work of the ultimate pianist virtuoso Franz Liszt.

Although Evan Shinners’ program begins with Capriccio on the occasion of his beloved brother’s departure, a work whose movements evoke some stages of separation, it is through him that the American musician, a passionate admirer of the greatest of music giants Johann Sebastian Bach, will be introduced to the audience. In addition to his great attachment to J. S. Bach’s music, Shinners is also known for the original and eccentric music he creates. In 2012, he had the honor of performing on the White House lawn at a Christmas tree candle light ceremony, where he performed Bach’s works in combination with commemorative holiday songs in front of 19 thousand people, including the Obama family. In November 2018, he opened the ‘Bach Store’ at the intersection of 56th Street and Broadway, where he performed Bach for thirty-seven days in a row, in an area of about five hundred square meters, for five hours a day.

This interesting musician also prepares the work of Louis Couperin for Tuesday, in addition to the rich selection from Bach’s repertoire, which the artist claims “did not use a mirror” and that “his poetic freedom and unique expression in music have no reflection.”

About Bulgarian pianist Evgeni Bozhanov to close the Orlando Piano Week August 29, the Dallas Morning News once wrote: “He can produce more shades of tone in one stroke than most pianists throughout his life.” numerous orchestras, including the Belgian National Orchestra, the Philharmonia Philharmonic Orchestra, the Royal Liverpool Philharmonic Orchestra and many others. Evgeni also recorded in the Musikverein Vienna, the Suntory Hall, the Berlin Philharmonic, at the Serate Musicali in Milan…

Two composers, two musical epochs, two different sensibilities. The music of Baroque miniaturist Italian composer Domenic Scarlatti captivates with his playful carefree joy, while Liszt’s monumental Sonata in H minor, created about a hundred years later, still intrigues the audience today, but also the music analysts, with its mysterious, contemplative, but on the other hand clearly narrative in nature.

Tickets for Orlando Piano Week concerts are available @ the Dubrovnik Symphony Orchestra office from 9am to 2.30pm (with a range of benefits and discounts for citizens of Dubrovnik), At KIC Luža, Perla Adriatica Agency on Ploče, and at the Dubravka Pile Gift Shop and online via Ticket Service. Tickets are also available one hour before the concert in front of the Palace. The number for information and reservations is 417 110.

Orlando Piano Week is supported by the City of Dubrovnik, the Dubrovnik Tourist Board and Adriatic Luxury Hotels.